Refugee doctors recruited to fight the pandemic in the UK

Mohammad Saoud trained as a doctor in Syria before coming to the UK.

The project is helping foreign medical graduates living in the UK to pass the exams needed to register with the General Medical Council (GMC).

There are thought to be more than 1,000 refugees on the scheme in hospitals and trusts across England.

Saoud is one of 50 international doctors, most of whom are refugees, to have been recruited by The Royal London Hospital's intensive care unit.

They were brought in to help fight the pandemic at the height of the second wave of COVID-19 in the UK.

"It was really overwhelming working here and seeing a lot of people around you, you know, suffering," explains Saoud.

The medical support worker (MSW) role is suitable for those who have a medical qualification but have been out of clinical practise for over a year and need to work under clinical supervision.

Ahlam Mutahar Muthanna trained to be a doctor in Yemen and started working in the humanitarian field, helping people caught up in war and conflict.

Now - like Saoud - she is a MSW at The Royal London Hospital and says it's helped her continue her medical career, after the war made her fear it could be over.

At the height of the second coronavirus wave The Royal London Hospital's specialist COVID-19 unit cared for 160 patients at a time and was Europe's biggest intensive care department.

Dr Heike Bojhar was in charge of organising the medical staff and says schemes such as these provide a fast and efficient way of accessing more professionals:

"From the time you decide you need new specialist doctors, it's a minimum of 10, sometimes 15 years to really train them. These doctors come already trained in terms of monetary value, that's very cheap."

"There's a shortage of more than 1000 consultant radiologists and Mohammed was fully trained in Syria. He saves the NHS money by not having to train him and he benefits the patients here because we have a shortage of doctors."

By carrying out tasks such as cancer screening and ultrasounds these medical professionals are helping clear a backlog of treatments caused by the pandemic as well as filling a major staff shortage. 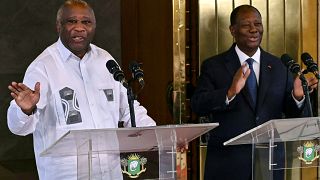