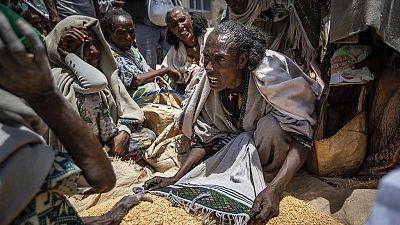 Two international aid groups said Tuesday that the Ethiopian government had suspended part or all of their operations, while the United Nations humanitarian chief warned Ethiopian authorities that blanket accusations against aid workers in the country’s embattled Tigray region and elsewhere are “dangerous” and must stop.

Martin Griffiths spoke to reporters amid a new push to get more badly needed food and other supplies into Tigray, where hundreds of thousands of people face famine conditions and Ethiopia’s government has been accused of blocking assistance. He acknowledged that his own flights into and out of Tigray had “difficulties” with searches and delays.

Separately, the aid groups Doctors Without Borders and the Norwegian Refugee Council said Ethiopia’s government had suspended their operations on July 30. An NRC spokesman said the stated reasons were “public advocacy” and failure to obtain proper permissions for foreign staff and that all operations were suspended.

A Doctors Without Borders spokeswoman said the operations of the charity’s Dutch section, its largest in Ethiopia, were suspended for three months in the Tigray, Amhara, Gambella and Somali regions, and the group was “urgently seeking clarification from the authorities.”

Doctors Without Borders, also known by its French acronym MSF, warned of “dire consequences” in the regions where access to aid is already limited. MSF already had suspended operations in three major Tigray towns after the murder of three colleagues by unknown attackers.

The Ethiopian government spokesman for the Tigray emergency task force, Redwan Hussein, alleged last month that aid groups are “playing a destructive role” in the nine-month conflict and even arming the Tigray forces that long dominated Ethiopia’s government before a falling-out with the current prime minister. Redwan didn’t respond to questions on Tuesday.

Such blanket allegations are “unfair” and need to be backed up by evidence, the U.N. humanitarian chief said.

Griffiths also told reporters that some progress had been made on aid delivery to Tigray after more than two weeks as 122 trucks with supplies had finally reached the region. The previous attempt at an aid convoy was attacked last month on the only operational land route into Tigray as fighting continues.

But some 100 such trucks are needed to enter Tigray every day, Griffiths said, adding the needs are “huge, they are urgent.”

He said Ethiopian Prime Minister Abiy Ahmed during their talks asserted that he was trying to ensure more than one land route from other parts of Ethiopia into Tigray for aid. But a route from a neighboring country such as Sudan can be “politically sensitive,” Griffiths added.

Some 100,000 people in the Amhara region have been displaced by the insecurity, the U.N. humanitarian chief said.

On Wednesday, the administrator of the U.S. Agency for International Development, Samantha Power, is visiting Ethiopia in another push for better access to the Tigray region, which remains without phone, internet or banking services.

While Ethiopia’s government has blamed the blockage of aid on the Tigray forces, a senior USAID official last week told The Associated Press that the allegation is “100% not the case.”