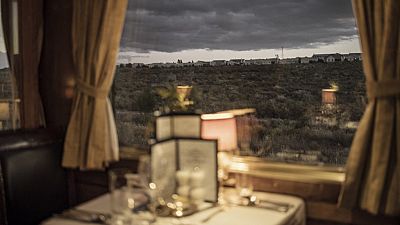 Breathtaking vineyards, wildlife reserves, sandy beaches and cultural riches: South Africa could have benefited from a post-Covid tourism boom. But scenes of rioting this week have dashed that hope, further damaging the ailing sector.

All bookings scheduled for this week at Umzolozolo Lodge, a luxury hotel offering private safaris, have been cancelled. Usually, visitors from South Africa and before that from all over the world, laze around on poolside loungers overlooking the rolling plains of the Nambiti Game Reserve, hoping to catch a glimpse of lions, elephants or rhinoceroses.

But this exotic paradise is located on the side of Ladysmith in Zulu country (East), the epicenter of the convulsions.

"We were just starting to get back on track," says Tracey Hellerle, noting that the impact of the pandemic forced her to lay off staff.

Customers cancelled because the violence made "the national access road look like a war zone" and they "were terrified to drive here".

Tourism, a pillar of the South African economy already weakened by the pandemic, accounted for 7% of GDP and employed 760,000 people in 2019, according to official figures.

In Clarens, a picturesque town nestled at the foot of the Maluti Mountains where city dwellers from Johannesburg as well as Durban like to spend the weekend, the owner of a bed and breakfast, Heinrich Pelser, fears that foreigners will remain permanently shocked by the troubles. "Canadians and Americans won't be coming back anytime soon," he says.

Since the beginning of the unrest, he has welcomed only a few motorists fleeing the violence-ridden port of Durban and a man who came to bring food to his mother.

As part of restrictions imposed in late June to limit a third deadly wave of Covid, the sale of alcohol is banned throughout the country, a blow to Clarens, known for its microbreweries, and the province's Cape Town region, known for its vineyards.

"It's not worth coming here if you can't taste wine or beer," says Pelser, who has six employees.

In addition, several popular beaches on the Indian Ocean coast of Durban have been closed for fear of contamination after arson attacks on industrial sites.

Since the looting and violence began on July 9, 212 people have been killed, including 180 in Kwazulu-Natal province (KZN, East).

The unrest has been "devastating," says Zanele Khomo, development officer at the ICC in Durban. "It's really going to affect us economically, and tourism-wise.

Images of wanton destruction and vandalism have gone viral, as have devastatingly false reports of civil war in the country and attacks on tourist sites.

"One thing that characterizes us in South Africa is our ability to get back on our feet," Khomo said, adding that entrepreneurs in her region are discussing a recovery plan with local authorities.

Visitors to Durban's usually busy waterfront are beginning to return, she notes. But "we need the government to provide us with more security because, even though we're through the worst of it (the riots), we're still scared.

Once the storm passes, "South Africa is still very popular, so visitors will come back," Hellerle wants to believe, noting that some lodges in KZN have not seen a single guest since March 2020. "We have to hope and pray."