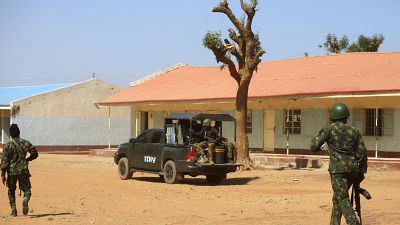 An emir kidnapped in northern Nigeria's Kaduna state has been freed while 13 other family members remained in captivity, his son said Tuesday.

The attackers, known locally as bandits, stormed the palace of 83-year-old Alhassan Adamu, the emir of Kajuru outside the state capital of Kaduna early on Sunday, and seized victims, including women and children.

Emirs are revered in predominantly Muslim northern Nigeria as custodians of Islam and tradition. They have no constitutional role, but wield influence and act as a link between the people and government.

"His Highness was released yesterday and he is now in the palace," said Musa Alassan Adamu, the emir's eldest son.

"He was dropped by his captors outside the town from where he walked to the palace," Adamu told AFP.

He said the monarch was taken to hospital for medical checks where he was certified to be in good health.

"The bandits are still holding 13 members of the family," the son said.

Twelve family members were initially thought to have been abducted with the emir.

A video clip seen by AFP shows the emir addressing his followers, who came to sympathise with him after his release.

He broke down in tears as soon as he began his address.

A source in the palace said the kidnappers had contacted the palace for ransom for the release of the other hostages.

Police in Kaduna have not yet commented on the incident.

Kaduna has recently become a target for kidnapping-for-ransom gangs, seizing students and travellers on highways, but the abduction of the emir marked the first time such a high-profile victim had been seized.

Northwest and central Nigeria have in recent years been terrorised by gangs of cattle thieves and kidnappers who raid villages, killing and abducting residents as well as stealing livestock after looting and burning homes.

The gangs have lately been attacking schools and abducting students to squeeze ransom from parents.

Around 1,000 students have been kidnapped since December.

On July 5, more than 100 students were kidnapped from a boarding school in Kaduna state, in the latest mass abduction targeting schools.