Ayivon trains on Lake Togo, the main body of water in the south of Togo. Under the guidance of her coach, the rowing athlete works six days a week with two daily sessions.

"The training course is fine. Compared to 2016, I think it's a little better." Ayivon told Africanews journalist Noël Tadégnon.

In 2016, she took part in the rowing event at the Rio Olympics. She participated then as part of the universality of the games.

Two years later in Tunisia, the 24-year-old, in a hard fight qualified for Tokyo 2020. Since then, she has continued working to achieve her goal: to win a medal at the Olympic rowing.

Rowing is a water sport of gliding and endurance.

It consists of propelling a boat with oars along a straight line of thousands of meters.

The rower has his back to the direction of the boat's progress and rolls it with a gesture that combines strength and finesse.

Togolese sports authorities are not leaving anything to chance. They have put in medical follow-ups and sustained attention to Ayivon.

Paulin, Laméga is the sports director of the National Olympic Committee of Togo.

"I saw that she has a strong mentality, she knows what awaits her. She wants to take up this challenge: to win a medal for Togo -  Lamega says.

Will Calire Ayvon be able to follow in the footsteps of her predecessor, by becoming the second Olympic medalist of Togo in the same discipline? Africanews correspondent in Lomé, Noël Tadégnon reports that in any case, she (Claire Ayivon) is ready for it! 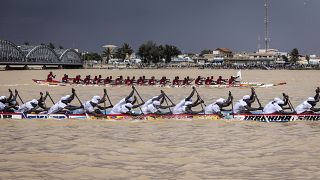