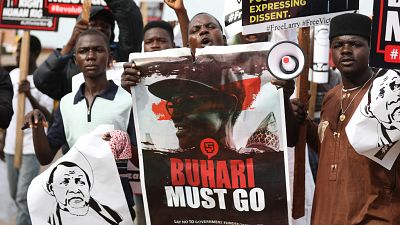 Five Nigerians who were arrested for wearing T-shirts criticising President Muhammadu Buhari have filed a lawsuit against the security services, their lawyer said on Friday.

The men were detained during a church service led by a well-known evangelical pastor in the Nigerian capital Abuja, and their lawyer said they were still being held.

They had been wearing T-shirts with the slogan "Buhari Must Go!" when they were detained by agents from the Department of State Services (DSS), which is in charge of counter-intelligence and domestic security, lawyer Tope Tomekun told AFP.

"We have filed suits today on the five people arrested in Dunamis Church," the lawyer said.

The lawsuits demand the DSS produce the men in court as their whereabouts are unknown, he said.

The petition also says their rights to freedom of expression were violated.

The DSS did not respond to requests for confirmation.

Officials at the Dunamis church denied their pastor aided in the arrests.

"For the records, the Senior Pastor, Paul Enenche who was engaged in preaching the sermon in the second service was not privy to the unfolding development, let alone giving the order for their arrest," the church said in a statement.

Officials announced the ban after Twitter had removed a remark from Buhari's personal account for violating its policies.

The Nigerian leader is also under pressure to tackle the country's insecurity.

The security forces are battling a Islamist insurgency in the northeast, a surge in mass kidnappings by criminal gangs in central and northwestern states and separatist tension in parts of the south.