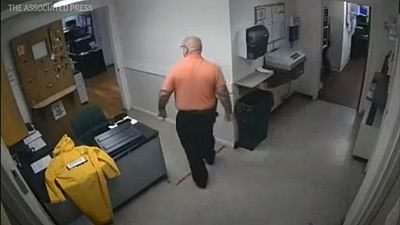 An Ohio police chief seen in a surveillance video putting a note saying "Ku Klux Klan" and a jacket displayed like a KKK robe and hood on a Black officer's desk has retired.

Bring learned what happened from the city law director after the police union representing the officer filed a harassment complaint.

The video, which did not include sound, shows Campo and the officer talking briefly after the officer discovered the note and jacket on his desk.

Bring said Campo, who is white, told him it was supposed to be a prank.

Campo was a Sheffield Lake police officer for 33 years and chief for the last eight.

The Black officer has been with the department less than a year.

Bring said he and the officer cried during a conversation about what happened.