"When I look at the statistics, the numbers, it always surprises me, no one could have predicted this," he says. 'Jerusalema' was the most requested song on Shazam for eight weeks in the autumn of 2020.

The story is known. Released at the end of 2019, the single got a new life when it went viral on social media -- with diverse choreography by the adoring public to the track spreading across the internet and into the lives of everyone around the globe.

"I would never have thought that police officers could dance to my music," he says with amusement. He didn't get a big head, despite the luxury cars on display on his social media accounts. "I had already had success before 'Jerusalema', without any connection of course, but now everything becomes more comfortable, this title will generate income for the rest of my life," he savours.

Featured singer Nomcebo Zikode's life has changed too. When he approached her to lend her voice to "Jerusalema", she was thinking of giving up music. Now, she has just released an album.

And Master KG is also back with a new single ‘Shine Your Light’ -- an Afro-pop collaboration with Senegalese American hip hop artist Akon and French DJ David Guetta.

The talented artist was happy to work with his two internationally-renowned music industry peers.

"You know for me, both David Guetta and Akon represent love, they represent unity and togetherness, which is the reason why I chose them to do this beautiful song with them because my music also, it’s kind of representing the same thing. Love, unity, and positive vibes."

Master KG lived with his mother in the small town Calais in the northeast of South Africa. She worked as a hotel employee and his father is a teacher. He really got into music when an uncle gave him his first computer in 2013.

The self-described village boy now has a recording studio near Johannesburg and has since been named one of the 30 most influential people under 30 on the continent by Forbes Africa.

He has even purchased a home for his mother and built another for his grandmother.

"Growing up in the village, you know, it’s not really easy. Because a lot of people criticize you, they say 'What are you doing? What is this? This is done by the people at urban places', and all that stuff, so these things, they say they can end up even making you give up. But then I just kept pushing because I just believed that, you know, this life that I’m living is not for me, I will change it and I will work harder."

With his latest project, Master KG is ready to use his musical genius to make Africa’s diverse and rich culture continue to shine brightly across the globe once again.

"Yes, I believe Africa is waking up, that’s why I’m even wearing this (sweatshirt that reads so on the front), because you know we’re just getting started, you know, things are really just getting started. We’re actually getting on the right path, you know, musically and socially and other things. I just believe that it’s, you know, our time. It’s our time. This has been a long time coming. Now it’s the time for us to shine. "

"For the title of the album, the fans must help me, help me find a title, it will be an album dedicated to the world, rich in the encounters I've had." When told that he might receive a colossal number of proposals, he laughs: "there's sure to be one that will fit." 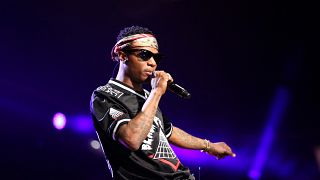