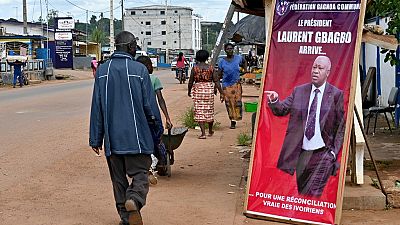 Opponent, president, prisoner: Laurent Gbagbo, 76, has gone through phases of glory and decline throughout his political career which have not diminished his popularity among his people in Côte d'Ivoire.

President from 2000 to 2011, Laurent Gbagbo is due to return to his country on Thursday after ten years of absence. It comes after his acquittal at the end of March by the International Criminal Court in The Hague (ICC), on charges of crimes against humanity committed during the post-election crisis of 2010-2011 during which 3,000 people were killed. A crisis born of his refusal to admit the victory of Alassane Ouattara in the 2010 presidential election.

In The Hague, he had during the hearings wanted to bring out his "truth", without ever doubting his right. For him, the former French colonial power in Côte d'Ivoire is behind a "conspiracy" that led to his humiliating arrest on April 11, 2011 in Abidjan by the forces of Alassane Ouattara supported by Paris.

"Laurent Gbagbo continues to embody the break with the French colonial legacy", and "this remains a key element of his popularity with the younger generation", says Gilles Yabi, founder of Wathi, a West African political analysis center.

A popularity that does not seem to have eroded during his absence from Côte d'Ivoire where thousands of people are preparing to welcome him come Thursday.

This is true in his home region of Gagnoa (central-west) of course, and in his village of Mama, where preparations are well underway for a triumphal welcome to the one nicknamed the "lion of Africa" or the "Woody of Mama" (a man, a real one, in the language of his ethnic group), but also in popular neighborhoods of Abidjan, including his stronghold of Yopougon.

In addition to his political background, Gbagbo's popularity is linked to his cheeky personality and his talents as a tribune, in contrast to the two other heavyweights of Ivorian politics, Alassane Ouattara, 79, and former president Henri Konan Bédié, 86.

Coming from a modest background, a socialist presenting himself as the defender of the oppressed, he has, according to Gilles Yabi, a discourse "that affirms a will for sovereignty" in contrast to "the very smooth and technocratic discourse" of Mr. Ouattara and Mr. Bédié, who are belived to be "in tune with the international actors".

From abroad, Laurent Gbagbo has kept control of his party, the Ivorian People's Front (FPI), which he wanted to participate in the last legislative elections in March, whereas he had boycotted all elections for ten years. A sign, according to those close to him, that he is returning without a spirit of revenge and intends to take part in the policy of "national reconciliation" in a country still scarred by the politico-ethnic violence that has marked its history over the last 20 years. Denouncing "impunity," the victims of the violence of ten years ago doubt it.

Laurent Gbagbo, a historian by training, began his career as a student unionist in the 1970s and 1980s. It was during this period that he emerged as the main opponent of the "father of the nation," Félix Houphouët Boigny, by creating the FPI underground in the midst of the one-party regime. This activism earned him prison and then exile in France. He openly entered politics in 1990, with the advent of the multiparty system for which he had fought.

His time came on October 26, 2000, when he was elected president under "calamitous" conditions, according to his own admission. He defeated General Robert Gueï, author of a military coup in December 1999, who did not recognize his defeat. Violence followed this election from which Henri Konan Bédié, overthrown by General Gueï, and the former Prime Minister Alassane Ouattara were excluded. He saw the hand of Alassane Ouattara behind the rebellion which, in September 2002, failed to overthrow him but took control of the north of the country.

Faced with France and the rebels, Laurent Gbagbo relied on the "young patriots" who set the streets ablaze and whose leader, Charles Blé Goudé, also prosecuted by the ICC for crimes against humanity, was also acquitted. He signed a peace agreement with the rebels in 2007, and was captured in April 2011 by them, allied to Alassane Ouattara and aided by French bombing.

First imprisoned in Korhogo (north) and then in The Hague, Laurent Gbagbo is coping, in particular thanks to his evangelical Christian faith, like his wife Simone, imprisoned in Côte d'Ivoire before being amnestied, with whom he had two daughters. He also has a son, Michel, a member of parliament for the FPI, born of a first marriage to a French woman. He is due to return to Abidjan with his partner Nady Bamba, a 47-year-old former journalist.