Millions of Algerians living abroad are unable to return to their home country despite the partial reopening of borders.

Algeria began partial reopening of air and land borders on Tuesday after more than a year of closure over the pandemic.

"I bought tickets for my little family, my wife and I and my children, for the year 2020, it was already planned for last summer. They told us that the tickets would be valid for next year, as soon as the borders reopen. So as you can see... apparently some flights have resumed but we are not on them", said Nassim Abdelhak, a caretaker.

The government announced last week that it will allow flights from France, Spain, Tunisia and Turkey.

But with a 5-day quarantine at designated government hotels, which they must pay for themselves.

Tassdit Belkhalsa was accompanied by her 81-year-old. She’s outraged at the development.

"I want to understand why this Algerian president is doing this to us! We are children of Algeria, we live in France, we have our links, our cultures and everything and they do this to us, it's shameful", Belkhalsa said

These measures have caused considerable discontent among the large Algerian diaspora, particularly in France.

Earlier in the day, the same aircraft had taken around 60 passengers to Paris.

Local media showed the passengers disembarking onto the tarmac at Algiers, before being led directly to coaches to be taken to their hotel for isolation.

Algeria's health ministry said the country has recorded almost 3,500 deaths from Covid-19 since the first case was registered in February 2020.

Around 130,000 cases have been registered in the country of 44 million people. 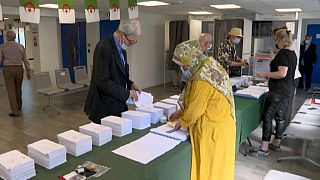