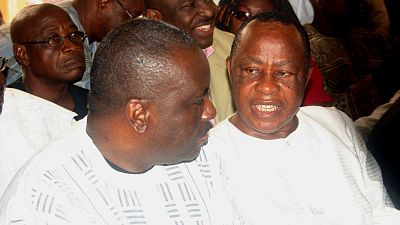 Millions of dollars worth of Nigerian state funds that were stolen by a former governor and laundered in the United Kingdom have been returned to Nigeria, the government said on Tuesday.

Former Delta State Governor James Ibori was convicted of money laundering in the UK in 2012 and prosecutors said he stole around $165 million.

During his term as governor between 1999 and 2007, used public funds to buy residences, luxury cars and a private jet, according to British justice.

"The federal government has received £ 4,214,017 ($5.8 million)of the embezzled funds," Nigeria's Justice Department said in a statement.

The recovered money is to be invested in infrastructure projects, such as the Lagos-to-Ibadan Expressway, the Abuja-to-Kano road and the second Niger Bridge.

Ibori was jailed in April 2012 for embezzling nearly 50 million pounds ($70 million) after a lengthy extradition procedure and was released on bail in December 2016 in London.

His case had been seen as iconic in the fight against high-level corruption in Nigeria, with billions of pounds sent to Britain every year.

A leading figure in the People's Democratic Party (PDP), he is also said to have used the money to finance the election of Umaru Musa Yar'Adua as President of Nigeria in 2007.

Millions of dollars stolen by former military ruler Sani Abacha have also been repatriated from Switzerland and other countries.

Abacha, who died in June 1998 after ruling Nigeria with an iron fist for nearly five years, is said to have stolen some $ 5 billion from the country's coffers.