It’s an unprecedented number of arrivals in Spain in a single day.

On Tuesday, at least more than 6,000 migrants from Morocco arrived in the Spanish enclave of Cueta, on the north Coast of Africa.

The Spanish government said, the number is believed to include some 1,500 teenagers.

Ylva Johansson is the EU commissioner for home affairs. She said ‘’what’s important now is Morocco’s commitment to stop the irregular departures.’’

Migrants soaked in seawater can be seen on shore as Spanish police try to prevent them for reaching the enclave.

The sudden influx of migrants has strained relations between Rabat and Madrid.

"The migration card is used as a blackmail as a way to put pressure on a member-state in this case the Spanish government. The Spanish government of course depends on Moroccan government to stop these irregular crossings, like Greek government is dependent on Turkey to stop refugees coming from Turkey’’, said Blanca Garcés, an expert on immigration and a Senior Researcher at the Barcelona Centre for International Affairs.

Many African migrants see Ceuta and nearby Melilla, as a gateway into Europe.

Last year, 2,228 of them crossed into the two enclaves by sea or by land, often risking injuries or death. 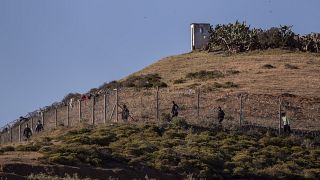