As political tensions and uncertainty continue to rise in Chad, our journalist Ruth Laetitia Lago had a talk with Attorney Max Loalngar to get more insight on the current happenings.

We have with us the head of the Coordination des Actions Citoyennes du Tchad, whose civil platform called for a peaceful march against the junta's seizure of power in Chad on Tuesday, April 27 after the death of President Idriss Deby Itno.

Several demonstrators lost their lives and many others were injured. Since then, a transitional government composed of 40 ministers and secretaries of state has been appointed -- and a new Ministry of National Reconciliation has been created.

Attorney Max Loalngar, hello.
You are calling for a new demonstration this Saturday, can you give us the reasons?

Attorney Loalngar: We called for this march to reaffirm our position and we had said so that the death of our comrades who were killed on the 27th would not be in vain, we would have to stand up and continue our fight in their memory and to pay tribute to them.

Ruth: Do you feel that the government of the Transitional Military Council is ready to include civil society in the reconciliation process?

Attorney Loalngar: What civil society, the problem is not the participation in the manager, if it was that, we would not bother, what are the principles with work, is Chad a democracy or is it a dictatorship, why is it that for once people refuse to do things properly; I still don't have a real civil society in this country, it is represented by the Ced, by the UST, by the CTDH, by the LTDH, by all the organisations that are members of WAKIT TAMA, and that call for a march. Civil society's mission is to defend the general interest, the well-being of our population, so when someone takes a stance that is contrary to the well-being of the population and claims to be from civil society, then we must question ourselves twice before granting them the name of civil society.

Ruth: Some members of the opposition like Saleh Kebzabo's party have joined the CMT. What gesture can we expect from General Mahamat Idriss Deby to put an end to the demonstrations?

Attorney Loalngar: Look, they are politicians and this is not the first time they have betrayed us. They have already shown in the past that what matters to them is not the well-being of the population, depending on whether the wind is blowing east or west, they can live with it. We say that the CMT is illegal, so we don't expect anything from it, nothing at all, we just have to respect it, and bring them back to the table so that they can find their own way out of the crisis we are going through at the moment because you see it is a country that is down, and it is not me who says it, Déby himself said that he found the foundations of this country on the ground, it is inadmissible, we expect nothing from the CMT, which since its constitution we realize that it is only for family photos, apart from family photos, have you seen them take action for Chad and for posterity.

Ruth: Attorney Max Loalngar, thank you for answering our questions on Africanews.

Attorney Loalngar: You are welcome. 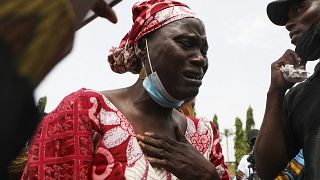