Ethiopia's elections are just a month away and posters of Prime Minister Abiy Ahmed's Prosperity Party are already up.

But there are obstacles to credible polls, with the war in the northern Tigray region and ethnic violence there are major logistical hurdles.

Ahmed came to power three years ago and promised to hold the most democratic elections and promised a break from Ethiopia's authoritarian past.

But the opposition says that hasn't happened and fears a repeat of the 2005 vote which saw a lethal crackdown on protesters.

"What has happened in 2005 and later, I think has made it abundantly clear for most Ethiopians - including people in the old ruling party - that this cannot continue, that there is no peace to be had when a government is in power without any popular legitimacy," said Birhanu Nega, Leader of the opposition Ethiopian Citizens for Social Justice party (Ezema).

The war in Tigray will make it voting in large parts of the country impossible.

Diplomats say the electoral board is missing logistical support which is usually provided by the military, who are tied up in Tigray.

"For our country... it is not like we are virgins, we have an experience with this kind of politics, on ethnic-based politics for the last 30 years, and we have seen what the consequences are," said Nega.

"It hasn't brought our country together, it has actually created this wedge in society which led to conflict and massacres and all these ugly things that you don’t want a society to have."

Voter registration in other parts of the country has been hampered by logistical issues.

Opposition parties are also planning to boycott the June 5 vote, as some candidates have been arrested. and their offices vandalised.

"There is a broad acknowledgement that these elections won't be perfect, to say the least -- that there will be shortcomings, there will be grounds for criticism and for a lot of improvement," a Western diplomat said.

Ethiopia's election was planned for last August but delayed due to the coronavirus pandemic.

Even in the best of times, organising smooth elections is a tall order in the vast nation, hobbled by poor infrastructure.

Diplomats closely following the process also say the electoral board is sorely missing logistical support usually provided by the military, which is largely tied up in Tigray battling forces aligned with the region's former rulers, the Tigray People's Liberation Front (TPLF).

In mid-April, electoral board chair Birtukan Mideksa announced that only around half the country's 50,000 polling stations were operational and that two regions -- Afar and Somali -- had no functional stations at all.

She also sounded the alarm about lagging voter registration, saying a mere 200,000 people had signed up in Addis Ababa, a city of five million.

In recent weeks Abiy has tried to get preparations back on track, holding meetings with election officials and leaders from Ethiopia's 10 semi-autonomous regions while publicly urging Ethiopians to register.

The Prosperity Party's other main image is a pair of hands holding up three leaping figures -- one blue, one yellow, one red -- radiating waves of light.

It is meant to represent harmony among Ethiopia's diverse population.

But it belies the violence that has roiled Ethiopia under Abiy, threatening to imperil balloting.

Beyond Tigray, the electoral board chair Birtukan has highlighted hotspots of ethnic killings that have forced the election body to suspend activities, including in the country's most populous regions, Oromia and Amhara.

Hundreds have been killed since March in attacks in Amhara, sparking protests in many of the region's cities.

The European Union said this week it would not send observers to the polls, citing a failure to reach an agreement with the government on basic issues like communications and the observers' independence.

"As imperfect as it may seem, the country's path of democratization can only be defined (and) determined by its people." 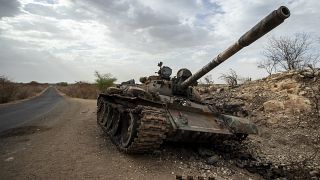 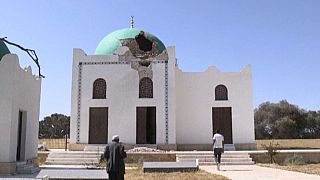 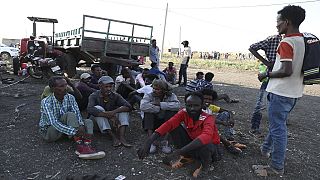