But when war broke out last year, the mosque in Negash became a target as Ethiopian and Eritrean soldiers marched on the town on their way to the capital Mekele.

Siraj was cowering in a washroom during the attack and heard the worst.

"Not only us, but Muslims all over the world are shocked that this happened," the frail 78-year-old told AFP.

"It is not only our heritage but rather the world’s heritage. It is the second Mecca."

His government blames the TPLF for starting the war by attacking army camps and has accused it of putting both civilians and heritage sites at risk.

In January state media asserted that pro-TPLF fighters had dug trenches near the al-Nejashi Mosque, drawing it into active conflict.

They also said Eritrean soldiers had looted the mosque compound.

There are fears that other heritage sites in Tigray have suffered similar -- or even worse -- damage.

Both Alula and Wolbert Smidt, a Tigray-focused ethnohistorian at the University of Jena in Germany, said they had received reports of gunfire and shelling at the sixth-century monastery of Debre Damo, north of the Tigray city of Adigrat.

More than 20 scholars voiced concern for the monastery in a January open letter calling for "the salvation of the cultural heritage of Tigray."

"It is beyond any doubt that the conflict is causing heavy damage... but since most communication lines remain cut off and the information coming from the region is minimal, it is difficult to assess the real scope of the losses," the letter said.

Six months on and there is no end in sight to the war with reports of massacres and rapes.

Experts are now sounding the alarm for religious and cultural sites.

An attack on the Ligat Kirkos church, near the border with Eritrea, was likely part of an attempt by Eritrean soldiers to eradicate Tigrayan developments in territory the two countries have long contested, Alula said.

If confirmed, the scale of the damage to heritage sites would be unprecedented, said historian and Ethiopia expert Eloi Ficquet.

Proper recovery will require not just repairing physical sites, but also somehow mending ties between the state and the population, he said.

"If reconstruction is only material, a reconstruction only aimed at tourists, it would be disrespectful of the very nature of this heritage," he said.

Alula, the Tigray academic in Japan, says he draws some hope from the notion that heritage sites, and the power they possess, can never be fully eliminated.

"Even if you destroy them, you are just adding another layer of history on top of them," he said.

"Future generations will be able to tell the story of what happened during this time, and maybe they can learn from these problems in a way that leads to peace."

He added: "At this point, though, it's very hard." 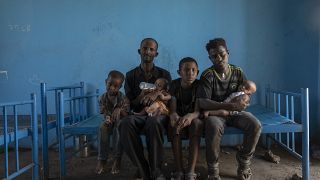 'Look after my babies': In Ethiopia, a Tigray family's quest

'Look after my babies': In Ethiopia, a Tigray family's quest