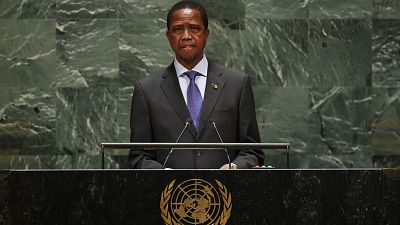 The Patriotic Front (PF) confirmed Lungu at a ceremony held at the Mulungushi International Conference Center in Lusaka, the country’s capital, by presenting him with a certificate of adoption as flagbearer for president.

The vote is scheduled for August 12.

Lungu was unopposed as he was re-elected head of PF at the party's national congress in April.

Davies Mwila, the party’s national secretary said the Zambian leader had followed all the provisions of the party constitution and that his adoption was final.

But his decision to contest the elections has received sharp criticism from the opposition which argued that he is not eligible to stand having served constitutionally mandated two terms.

Lungu’s first term in office lasted only one year and six months when he took over after the death of the previously elected president, Michael Sata.

He then won re-election in a disputed vote to a second, full term in August 2016.

A court ruling in 2018 said President Lungu would not have breached the two-term limit by running again in 2021.

He faces stiff competition from a familiar foe - Hakainde Hichilema, leader of the main opposition, the United Party for National Development, in a vote likely dominated by concerns over debt and corruption.

During President Lungu’s rule which began in 2015, Zambia’s debt jumped exponentially. Its external debt stock stands at over $12 billion currently.

Financial imprudence and a sharp fall in copper prices got Zambia to fall back on its debt obligations.

Last November, Zambia defaulted on a $45 million payment to its Eurobond creditors, becoming the first sovereign country to default during the pandemic. In January, it failed to pay another $52 million.