Two weeks after the death of Chadian President Idriss Déby Itno, the ruling junta, led by his son Mahamat Idriss Deby, appointed a transitional government on Sunday to address international and domestic concerns.

Since its establishment following the sudden death of the head of state, the Transitional Military Council (TMC), chaired by Mahamat Idriss Déby surrounded by 14 generals, is accused by the opposition and civil society of "institutional coup d'état" and perpetuating a "dynasty" after 30 years of power of Idriss Déby Itno.

But Saleh Kebzabo, the main opponent of Marshal Déby, recognised the new authorities on Sunday and two members of his party, the National Union for Democracy and Renewal (UNDR), were appointed to the posts of Minister of Livestock and Deputy Secretary General of the government.

"We recognise the authority of the CMT, otherwise we will not be in government," Kebzabo told AFP.

Another opponent of Idriss Déby Itno, Mahamat Ahmat Alhabo, of the Party for Liberties and Development (PLD), was appointed Minister of Justice.

But most of the regal ministries remain in the hands of the Patriotic Salvation Movement (MPS), the party of the late president, according to the list announced Sunday evening on state television by the army spokesman, General Azem Bermandoa Agouna.

Several former ministers of the last government of Idriss Déby Itno have been reappointed in their previous portfolio or appointed to another ministry. Spokesman for the last government, Chérif Mahamat Zene is appointed Minister of Foreign Affairs, a position he previously held from 2018 to 2020.

For his part, Daoud Yaya Brahim is in charge of Defence, a portfolio he previously held under Idriss Deby Itno.

By decree, CMT President Mahamat Idriss Déby, a 37-year-old general, has also created a new Ministry of Reconciliation and Dialogue, having recently promised to organise an "inclusive dialogue".

At its head, he appointed a figure of Chadian political and military life: Acheick Ibn Oumar, a former rebel leader who had become in 2019 diplomatic adviser to President Déby.

The last Prime Minister of Idriss Déby Itno before the latter removed the post in 2018, Mr. Pahimi Padacké had promised a "government of national reconciliation" and pleaded for a "sacred union to save the Nation".

But the day after his appointment, the opposition and civil society called for demonstrations against the military junta. At least six people died during these marches, which were banned as usual in Chad.

More than 650 others were arrested, most of whom were later released. Other smaller marches have taken place since then: on Wednesday, then Saturday in the south of the country. All were banned and then repressed by the security forces.

The CMT has promised "free and democratic elections" in 18 months. In the meantime, the Transitional Charter provided for the establishment of a transitional government, whose members are appointed and dismissed by the President of the CMT.

The latter is also "the supreme commander of the Armed Forces" and also chairs "the Council of Ministers, the Councils and Higher Committees of National Defence", according to the Transitional Charter.

A mission of the African Union Commission has been in N'Djamena since Thursday to investigate possible sanctions against the junta.

The mission, which will initially last seven days but is expected to leave earlier according to one of its members, is to "examine strategies to facilitate a rapid return to constitutional order and democratic governance".

The appointment of the transitional government comes as the army and a rebel group, the Front pour l'alternance et la concorde au Tchad (FACT), fight in the west of the country in the Kanem region.

The fighting began on 11 April, the day of the presidential election in which Idriss Déby Itno was re-elected for the sixth consecutive time. It was during fighting between the army and the FACT that Déby was killed. 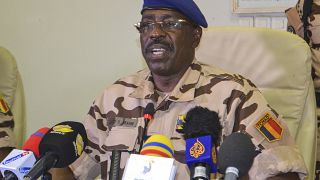