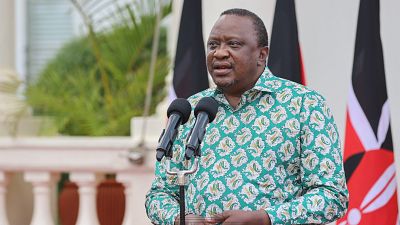 Kenya hit out at the United Kingdom after London added the east African country to its coronavirus travel ‘red list’.

In a strongly-worded statement on Saturday, Kenya’s foreign affairs ministry said the decision was ‘discriminatory’ and lacked ‘logic and scientific knowledge of the disease or the spread of the pandemic’.

On Friday, the UK announced new travel restrictions against travelers from Kenya saying it had established the South African coronavirus variant was fast spreading locally in the country.

The decision means that Kenyans or anybody transiting through Kenyan airports is banned from setting foot in the UK starting on April 9.

On Sunday, Nairobi responded with its own measures, banning passenger flights originating or transiting through UK airports for a month.

In addition, passengers from the UK will be required to produce negative Covid-19 certificates and valid Covid-19 vaccine certifications.

Only cargo flights are exempt from the ban. But crew members will be required to present both a vaccination certificate and a negative PCR certificate. The measures take effect on April 9.

Kenya Airways, the country’s flag carrier scheduled two repatriation flights to carry nationals and other passengers home before the measures kick in.

“The UK will not accept foreign nationals traveling from/via Kenya to the UK…..Due to the increased demand for travel to the UK before the advisory takes effect, we have added 2 new flights on 4th and 8th April,” the company said in a statement.

Kenya last week placed its capital Nairobi and four other counties under a new lockdown following an uptick in cases.

The Covid travel restrictions row is the latest to test these bonds. In late March, British soldiers training in Kenya set fire to a nature reserve, burning vast swathes of protected land in which elephants and other wildlife were killed – inviting public outrage.

In January, British soldiers arriving for their training mission were accused of bringing the UK strain of the coronavirus to Kenya.

The soldiers reportedly did not quarantine on arrival in the East African country.

In January, the UK also banned travelers from Rwanda citing the need to stop the spread of mutant strains of Covid-19.

Nairobi also accused London of hoarding vaccines saying it had more than it needs.

"Sadly, however, Kenya continues to see, with deep regret, that vaccine producing countries around the world have begun practicing a form of vaccine nationalism, possessiveness and discrimination, coupled with a vaccine hoarding attitude that can only be described as a form of “vaccine apartheid.”, the statement said.

The UK has ordered more than 400 million coronavirus vaccine doses, for a population of around 67 million people.

The country has so far administered over 31 million doses.

Kenya, which has a population of 53 million, has received just over a million Astra Zeneca vaccine doses from COVAX.