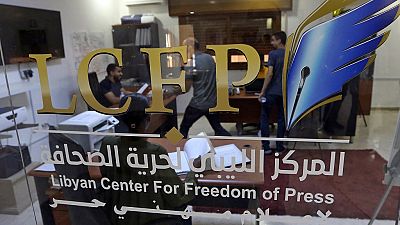 Media practitioners in Libya are witnessing an increase in censorship. Ten years after the overthrow of longtime leader, Moammar Gadhafi, journalists say they still face threats to their lives and intimidation.

A radio journalist, Nahla Tarhouni told AFP, ‘’ the state of the press reflects the state of the country’’. ''It’s catastrophic'', she added. But Sanaa Habib, a private radio station host remains upbeat.

"The situation is somewhat good, it's not excellent nor great, but good when we compare it with before. Ten years ago, the media in Libya was not existent, as it was 100% bias, and there were only certain people who published the news", Habib said.

Naima Mohamed is Libyan journalist working for a private radio station. She’s deeply concerned about the gains that have derailed for the last ten years.

"There is no room for deception and there are no journalists who did not suffer from a setback. For someone who fought for 10 years to have their voice heard, who managed to express themselves freely, suddenly to be confronted by censorship can only spell disappointment", Mohamed said.

Fighting finally came to a halt last summer, and ceasefire has allowed for a new unity government to take office in mid-March. They are to lead the North African nation to elections in December.

Media professionals paid a heavy price before this happened.

"Unfortunately Libya is witnessing an increase in the level of repression of freedoms for individuals. It is not only a repression of free speech, but there are real threats in the society against freedom of expression, the formation of associations and public freedom. There is an oppression exercised by the powerful people in the society", said Mohamed al-Najem, Director of the Libyan Centre for Freedom of the Press.

The Centre decries a "lack of political will" by Libyan authorities to defend their rights and freedoms.

Around 20 journalists have been killed with "total impunity" over the past decade, according to media watchdog Reporters Without Borders (RSF).

Scores of journalists, from both Libyan and foreign media, have been attacked or kidnapped by militias, with no recourse to justice.

Among them were Tunisian journalists Sofiene Chourabi and Nadhir Ktari, who disappeared in the Ajdabiya region of eastern Libya in 2014.

Their fate has never been officially confirmed, although several sources said the two men were killed by supporters of the Islamic State jihadist group, which for a time held sway over part of the country.