Somalia started administering COVID-19 vaccinations Tuesday with the inoculation of the health minister, who received the jab publicly to reassure the nation about its safety.

The Horn of Africa nation, which has recently experienced a surge of cases, on Monday received its first shipment of 300,000 doses of the AstraZeneca vaccine through the international COVAX initiative to ensure that low- and middle-income countries receive vaccines.

Somalia's first vaccinations happened in a small ceremony at the Martini hospital in the capital Mogadishu where Health Minister Fawziya Abikar Nur urged the public to embrace the vaccines to stem infections in the country of 15 million people and one of the continent's weakest health systems.

Only five people, including the minister and two employees of the World Health Organization, received a shot in the arm Tuesday.

It was not immediately clear why this was the case.

The virus has killed a growing number of prominent Somalis, including a former president. Somalia has recorded 8,946 confirmed cases of COVID-19, including at least 349 deaths, according to the Africa Centers for Disease Control and Prevention.

But some ordinary Somalis who spoke to The Associated Press said they are not keen on getting vaccinated.

"The EU that produced the (AstraZeneca) vaccines has stopped using it, among them France, so this nonsense we cannot simply trust it," said Abdulkadir Osman, a resident of the capital.

Sheikh Ibrahim Sharif, Imam of Masjid Iman mosque prefers to count on his faith rather than a man-made product being questioned by many worldwide.

"As a Muslim nation, when it comes to healing, nothing is more reliable than the Quran. It is the Quran that cures everything, even the diseases, so, we don't trust these vaccines, there is a lot of speculation going on regarding this vaccine and now let us trust the Quran and it's healing powers." 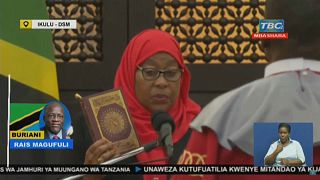