Libya's parliament voted Wednesday to approve a unity government to lead the North African nation to December elections, a key step towards resolving a decade of chaos and violence.

After two days of intense debate in the central city of Sirte, parliament approved Dbeibah's cabinet, with 121 of the 132 lawmakers present voting in support, his spokesman said.

The interim government must now tackle the many grievances of Libyans, from a dire economic crisis and soaring unemployment to crippling inflation and wretched public services.

Libya has been split between the UN-recognised Government of National Accord, based in the capital Tripoli and backed by Turkey, and an administration in the east supported by military strongman Khalifa Haftar, with the backing of the United Arab Emirates, Egypt and Russia.

Dbeibah, 61, a billionaire businessman from the western city of Misrata, was selected in February alongside an interim three-member presidency council to head the new unity administration.

The process has been marred by allegations of vote-buying, but Dbeibah defended the composition of his government.

"My first objective was to choose people with whom I would be able to work, no matter where they come from," Dbeibah said, during the debate in parliament.

Another key task facing the new administration is ensuring the departure of an estimated 20,000 mercenaries and foreign fighters. Dbeibah told lawmakers they were "a stab in our back". 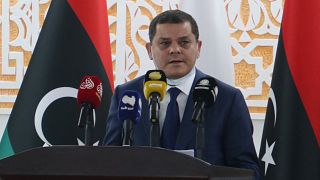