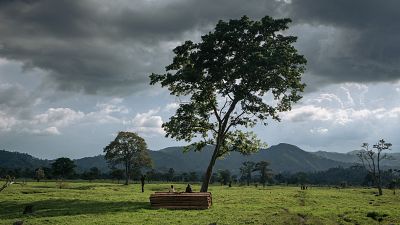 Six suspected kidnappers have been lynched by residents angry over the abduction of a girl in the eastern Democratic Republic of Congo, local officials said Tuesday.

The incident occurred in the village of Kitshanga in the mountains north of Goma, a day after the suspected kidnappers' arrest on Saturday.

When police sought to transport the suspects to the main town in the area on Sunday, residents took them and killed them, local official Willy Washekulu told AFP.

Police fired warning shots in vain to try to stop them, he said.

The six aged 20 to 22 were accused of kidnapping a three-year-old girl on February 24, said local civil society official Kahanga Robby.

Robby said that the lynching was because residents "no longer have confidence in the forces of order and justice system."

"Kidnappers have always been arrested then released a few days later," he said.

A total of eight kidnappers had originally been arrested, but two had escaped.

Washekulu said a charity worker had recently been kidnapped and was released after $1,050 was paid.