Seven people on board a military aircraft died in a crash on Sunday near Nigeria's capital Abuja, the country's airforce spokesman said.

The plane was scheduled to conduct a surveillance mission in connection with an operation to rescue dozens of people abducted from a school Wednesday in nearby Niger State.

President Muhammadu Buhari ordered security forces to free the kidnap victims and the army and police said they were tracking the gang.

The plane that crashed Sunday "was scheduled to conduct surveillance missions over Niger State and its environs in connection with the concerted efforts to secure the release of the students/staff," spokesman Ibikunle Daramola said in a statement.

The cause of the accident is still unknown but officials said the pilot had reported an engine failure.

"Sadly, all 7 personnel on board died in the crash," he added.

Video posted to social media showed water cannon being used to extinguish the flames at the scene, while a large number of onlookers crowded around.

The airforce said an investigation into the accident was underway.

"We should remain calm & wait for the outcome of investigation by the military," Hadi said in a Tweet. 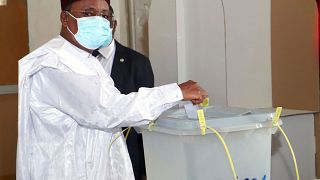