Pressure mounts on Moroccan authorities on Wednesday following the death of 28 people after heavy rains flooded a basement factory in the port city of Tangiers on Monday. Earlier, a senior fire official told local media that the victims were trapped with ''no way out'' and drowned. An official response to the tragedy only referred to an ‘’illegal textiles operation’’.

But a police source told AFP, the status of the factory, located in a residential area in the city’s southeast, was yet to be confirmed, adding the owner had not been questioned as he was still in intensive care. Residents are calling for accountability.

"There are factories that declare 20 people in the National Social Security Fund (NCSS) while they employ 50 or 40 people, but they are not originally sweatshops", said Abdelatif Saydi, a technician in a garment washing unit.

Driss el-Wafy is a Trade Unionist in the textile sector in Tangier. He said in ‘’Tangiers for example, more than 80 production units are not declared within the labor delegation’’.

"Most of these production companies only work for the benefit of the bosses and do not give rights to the workers, there is no declaration of CNSS (National Social Security Fund), no medical coverage, and no security measures, there is nothing, and I give you an example in Tangier: more than 80 production units are not declared within the labour delegation, nobody controls them here in Tangier and so they do what they want", el-Wafy said

The sister of the factory owner took to YouTuve to defend his brother. She said the business was legal. "He pays the taxes and the employees are declared to the CNSS," she said, referring to Morocco's social security system. She alleged that the state was trying to shirk its responsibilities over the flooding.

A representative of the country's textile industry association also said that "the company has business registration and is completely in order". Requesting anonymity, he said there were "hundreds" of such factories in Tangiers, "keeping alive thousands of families".

"If the factories are unauthorized, it's considered a crime, but it's also a crime if they are authorized, because they don't respect the conditions necessary for industrial production and they're not in an industrial zone", said lawyer and human rights activist, Abdelaziz Janati.

The deaths of the 28 people have put a spotlight on working conditions in Morocco’s informal sector. According to the Moroccan employer’s association, many fail to meet official standards. 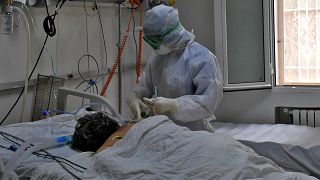