The leader of one of the criminal groups behind the abduction of more than 300 of the Kankara boys in Noth-western Nigeria has surrendered to authorities in exchange for an amnesty agreement.

Zamfara state government said Awwalun Daudawa and six other members of the armed group had handed over their weapons, swearing on the Holy Quran not to return to their former practices.

Awwalun Daudawa had kidnapped the 344 schoolboys in the Katsina State on behalf of the Boko Haram jihadist group.

For nearly a decade, the region has been plagued by violence from criminal groups known as "bandits", who mostly engaged in kidnapping for ransom and theft of livestock.

But some of them, like Awwalun Daudawa, have developed strong links with jihadist militants that wage war in north-east Nigeria.

Awwalun Daudawa, aged 43, was originally a cattle thief who turned to arms trafficking, particularly between Libya and northern Nigeria, where he traded with criminal and jihadist groups.

Over time, he forged an alliance with Boko Haram and became their arms trafficker, a security source told AFP.

Authorities have sought to negotiate peace agreements with these bandits, offering them amnesty in exchange for their reddition.

Addressing reporters, Awwalun Daudawa said doznes of other armed bandits had told him they were ready to cease fighting, provided they are not subsequently harassed. 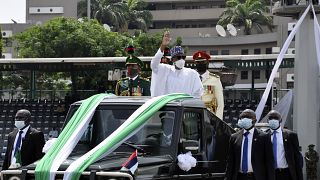