The defending champions could hardly have imagined winning the semi-final so comfortably in the southwestern resort town, with Soufiane Bouftini and Mohammed Ali Bemammer the other scorers.

Morocco created several records at Stade Omnisport, where the crowd was restricted to 25 percent of the 20,000 capacity due to the coronavirus pandemic.

The winning margin was the widest in a semi-final of a competition reserved for home-based players, bettering the 3-1 victory by Morocco over Libya in Casablanca three years ago.

They will face Mali in Yaounde Sunday hoping to join the Democratic Republic of Congo as two-time winners of the unique national team competition.

While Morocco cruised to victory, Mali drew 0-0 with Guinea after extra time in Douala earlier, then converted five consecutive penalties to win the shootout 5-4.

The Malians have proved spot-kick masters, also scoring from all five to eliminate Congo Brazzaville in the quarter-finals.

It will be the second time Mali contest the title decider having lost heavily to DR Congo in Rwanda five years ago.

On Saturday, Cameroon have an opportunity to regain some pride when they face Guinea in a playoff for third place.

The Cameroon-Morocco clash was billed the "final before the final" with the hosts hoping to build on a 2-1 quarter-final triumph over highly rated DR Congo.

But a Moroccan team that has improved in each of five matches quickly stamped their authority and silenced a predominantly Cameroon-supporting crowd.

The opening goal on 28 minutes stemmed from a blunder by goalkeeper Haschou Kerrido, who failed to grasp a free-kick, leaving Bouftini with the simple task of tapping the ball into the net.

Captain Ayoub el Kaabi, the nine-goal star of the 2018 title-winning team, set up the second five minutes before half-time with a deep cross that was pushed into the path of Rahimi, who made no mistake.

Rahimi lifted his tournament tally to five when he intercepted a pass on 73 minutes and scored the softest goal so far at the finals.

Bemammer notched his second goal of the tournament by just avoiding straying offside to finish a cross against demoralised opponents.

In Douala, the shootout was settled by the fifth kicks with Guinean Morlaye Sylla having his saved before Mamadou Coulibaly netted. 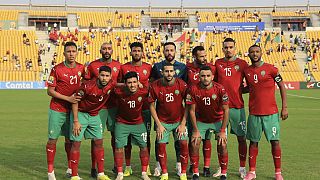 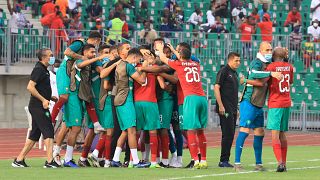