Residents of Cape Town are Over the Lockdown

Scores of Cape Town Residents defied the nation’s coronavirus-prevention beach ban - flocking to a number of the city’s sandy locales on Saturday in protest of both the ban and the rest of the most recent lockdown restrictions in the country.

Sanitary measures put in place by the South African government in light of the second wave of the COVID-19 pandemic which not only has hit South Africa the hardest on the continent but also now includes new variants of the virus.

As the surge in new infections overwhelms the country’s health system, Africa's most industrialised economy is expecting the first batch of 1.5 million Oxford/AstraZeneca vaccines on February 1, will also get nine million doses from Johnson & Johnson, if its vaccine is approved, and is negotiating with other undisclosed manufacturers. 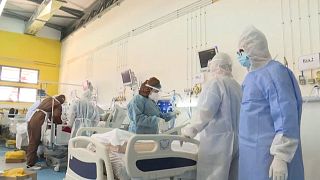