An Algerian supporter of the Hirak protest movement was sentenced to three years in jail on Monday for satirical social media posts mocking the government and religion.

Walid Kechida, 25, was accused of insulting President Abdelmadjid Tebboune and "offending the precepts" of Islam in internet memes and other online posts, said Kaci Tansaout, from the CNLD prisoners' rights group.

"Walid Kechida is sadly sentenced to three years in prison with a fine," Tansaout said, adding that lawyers would appeal.

Who are the Hirak?

The leaderless protest movement erupted on 16 February 2019, six days after Abdelaziz Bouteflika announced his candidacy for a fifth presidential term.

The mass rallies by frustrated citizens with corruption a sluggish economy and a lack of freedoms were peaceful and led to Bouteflika's immediate resignation on 2 April 2019.

But the protests continued, with demonstrators demanding a full overhaul of the ruling system in place since the North African nation's 1962 independence from France.

However, the protests were paused as the coronavirus pandemic erupted in March.

How has the government responded?

Algerian authorities have arrested and prosecuted several activists in a bid to stem the Hirak demonstrators.

The CNLD says over 90 people, including activists, social media users and journalists, are currently in custody in connection with the country's anti-government protest movement or individual liberties -- mostly for dissenting social media posts.

A November referendum to approve the constitutional changes received the backing of less than 15 percent of the electorate.

The vote was overshadowed by the novel coronavirus pandemic and Hirak calls for a boycott.

The NGO Amnesty International has called for the release all Hirak activists and said authorities are "taking advantage" of the COVID pandemic. 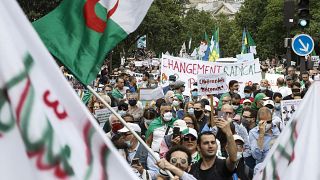 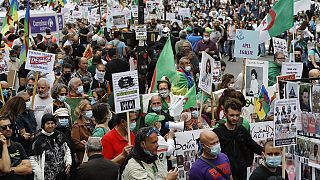