Uganda journalists walk out of a security press conference in the capital Kampala on Monday. The journalists say the move is to draw attention to increased violence against them by security forces in the country.

On Sunday, two journalists were shot at, in a scuffle between opposition politician’s campaigners and security forces. Police said Ashraf Kasirye, who works for a YouTube channel devoted to Bobi Wine's campaign, was in "serious condition".

"We have resolved to stop covering security agencies and the Uganda Media Centre, which is the centre for journalists in Uganda. Reason: these guys are continuing to beat us, harass us in the name of telling us to be patriotic, which is a partisan move", Gabriel Buule, journalist for the Daily Monitor said.

The Ugandan People's Defense Forces is urging the media fraternity to conduct themselves in a professional manner.

‘’My take on all of this is that if we all… we all care to stick to professionalism, these unnecessary unfortunate incidents will be minimized", Henry Matsiko, Brigadier General and chief political commissar at the Ugandan People's Defense Forces said.

In a statement, the Foreign Correspondents' Association of Uganda said two of its members were "deliberately targeted by rubber bullets" during the election campaign.

"Journalists have repeatedly warned that our safety is in danger, but the Ugandan security forces are not listening. Journalism is not a crime. Shooting journalists is," the group said in a statement.

"Tear gas was used to quell the violence and journalists were regrettably caught up during the process of dispersing the violent group," police spokesman Fred Enanga said in a statement.

Enanga added that "We do appreciate the critical role journalists (play) while covering the campaigns and pledge better protection cover so as to remain safe while documenting violent confrontations."

Bobi Wine, 38, is a pop star and lawmaker who is seen as the main challenger to incumbent President Yoweri Museveni in the January 14 polls.

Kasirye "sustained blunt force injuries above the left eye allegedly from a (tear gas) canister" and was taken to the Masaka hospital for emergency treatment. He will then be taken to Kampala, Enanga said. Two other cameramen were injured.

Wine, whose real name is Robert Kyagulanyi, said on his Twitter account that his campaign is "hoping against hope that (Kasirye) will live".

The candidate also said that a member of his security team, Francis Senteza Kalibala, was killed by a police vehicle when he was trying to help Kasirye. Police did not confirm the report.

Yoweri Museveni, 76, has been in power in the former British colony since 1986.

Wine's own arrest last month sparked protests and clashes in which at least 37 people were killed, marking a violent start to campaigning. 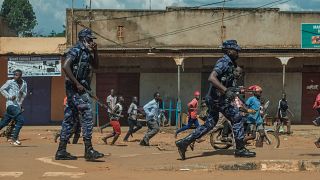