Tanzanians began voting on Wednesday morning to elect their president and members of parliament. The outgoing head of state John Magufuli, nicknamed the "bulldozer", faces main opponent Tundu Lissu, who has been able to reinvigorate the opposition, largely stifled during the last five-years.

On the semi-autonomous archipelago of Zanzibar, the situation had become clearly tense on Tuesday, with an opposition candidate - briefly arrested - and an accusation from his party that security forces had killed 10 people.

On Wednesday morning, in the Garagara neighborhood on the outskirts of Stone Town in Zanzibar, where police fired tear gas and live ammunition on Tuesday, 48-year-old Mnao said she came to the polling station early so as to get home quickly.

"During the skirmishes with the police, a tear gas grenade landed in my house. I screamed, I cried, I was distraught. My heart was beating very fast and I was praying," she said.

More than 29 million voters are called to the polls in mainland Tanzania and 556,000 on the semi-autonomous archipelago of Zanzibar, which together constitute the United Republic of Tanzania (about 58 million inhabitants).

In Zanzibar, voters not only vote in national elections (presidential, legislative), but also to appoint the president and parliamentarians of the archipelago.

"I thank God for giving me this opportunity to choose my leaders. We ask that the Electoral Commission is impartial so that peace reigns," Nestor Shoo told AFP Nestor Shoo, who arrived at 6:00 am in front of the polling station of Mwenge elementary school in Moshi, a city located near Arusha, at the foot of Mount Kilimanjaro, the highest peak in Africa.

There have been reports of the restriction of internet access across the country with some users experiencing difficulties in sharing and downloading images on whatsapp and tweeting.

- Who are the candidates? -

Among the 15 candidates running for the presidential election, there is a duel between Mr. Magufuli, 60 years old, candidate for re-election under the green and yellow colors of the party CCM ("The Party of the Revolution"), in power since 1961, and Tundu Lissu, 52 years old, on behalf of Chadema (Party for Democracy and Progress).

During his first term in office, Magufuli, according to his critics, was authoritarian and adopted an abrupt style of governance, true to the nickname he earned as Minister of Public Works (2010-2015): the "bulldozer" or "Tingatinga" in Kiswahili.

Shortly after his election, his tolerance for any form of criticism seemed to collapse.

Political rallies outside the election period were banned, draconian laws against the media were passed, journalists, activists and opposition members were arrested.

- Sixteen bullets in the skin -

Mr. Magufuli highlighted his fight against corruption, the extension of access to free education and a policy of major infrastructure projects in the hydroelectric and railway fields. He also resurrected the national airline.

Facing Mr. Magufuli stands Tundu Lissu, a lawyer by training, who returned to the country at the end of July after three years of exile.

In September 2017, after being arrested no less than six times during the year for various reasons, Mr. Lissu was the victim of an assassination attempt - which he claims was politically motivated - outside his home in Dodoma, the administrative capital.

He was shot 16 times. Twenty surgeries later, the 50-year-old limps, but still managed to campaign and attract crowds. So much so that in October, the leader of the popular opposition ACT-Wazalendo party, Zitto Kabwe, gave him his support, saying Lissu had "the best chance of beating Mr. Magufuli.

In return, Chadema sided for the Zanzibar archipelago presidency behind Seif Sharif Hamad, a veteran local opposition candidate running under the ACT-Wazalendo banner.

The election campaign was held without any consideration for the coronavirus, as Mr. Magufuli declared his country "free of Covid" in July, thanks to prayers.

The lack of opinion polls made it difficult to assess the popularity of the incumbent president and the public's perception of his policies.

Under Magufuli, the economy continued to grow, before Covid-19, at an impressive 6% per year, but job creation was "few" and aggressive tax collection affected the private sector says Thabit Jacob, a Tanzanian political analyst based in Denmark.

The IMF expects Tanzania to escape recession this year, despite the pandemic. A growth of 1.9 percent is at least expected.

Results are expected to be announced within one week. 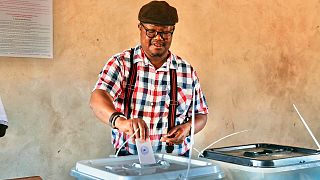