Sudan's transitional authorities and a rebel alliance signed on Saturday a peace deal agreed in August that aims to put an end to the country's decades-long civil wars, in a televised ceremony in Juba.

``The next biggest challenge is to work with all local and international partners to preach the agreement and its benefits,'' Prime Minister Abdalla Hamdok tweeted on Friday upon his arrival in Juba, the capital of South Sudan.

Reaching a negotiated settlement with rebels in Sudan's far-flung provinces has been a crucial goal for the transitional government, which assumed power after a popular uprising led the military to overthrow President Omar al-Bashir in April 2019.

Sudanese civilian leaders hope the deal will allow them to revive the country's battered economy by slashing military spending, which takes up much of the national budget.

Saturday's official signing in Juba sealed the peace deal reached in late August between the Sudanese government and the Sudan Revolutionary Front, a coalition of several armed groups.

The summit was attended by South Sudan President Salva Kiir, whose own country gained independence from Sudan in 2011 following decades of civil war. The head of Sudan's sovereign council, Gen. Abdel-Fattah Burhan and his deputy Gen. Mohammed Hamadan Dagalo, also attended the ceremony. Dagalo, the commander of paramilitary Rapid Support Forces, signed the agreement along with rebel leaders.

The deal would grant self-rule for the southern provinces of Blue Nile, South Kordofan and West Kordofan, according to a draft obtained by The Associated Press. Rebel forces would be integrated into Sudan's armed forces.

The Sudan Revolutionary Front, centered in the western Darfur region, South Kordofan and Blue Nile, is part of the pro-democracy movement that led to the uprising against al-Bashir, but the rebels didn't fully support the military-civilian power-sharing deal. That deal includes a six-month deadline for achieving peace, which ran out in February.

Sudan's largest single rebel group, the Sudan Liberation Movement-North led by Abdel-Aziz al-Hilu, was involved in the talks but has yet to reach a deal with the government.

Al-Hilu has called for a secular state with no role for religion in lawmaking, the disbanding of al-Bashir's militias and the revamping of the country's military. The group has said if its demands are not met, it would call for self-determination in areas it controls in the Blue Nile and South Kordofan provinces.

Al-Hilu attended Saturday's ceremony and met with Hamdok and Kiir to discuss the ongoing talks between his movement and the government, according to Hamdok's office.

Another major rebel group, the Sudan Liberation Movement-Army, which is led by Abdel-Wahid Nour, rejects the transitional government and has not taken part in the talks.

Nour's movement criticized the deal, saying in a statement it was ``not different from'' other previous deals that did not end the wars.

The Sudanese communist party, which is part of the protest movement that helped topple al-Bashir, also denounced the deal as a ``true threat to Sudan's integrity and future.''

The party said in a statement Thursday that the deal would ``create tensions and new disputes'' because other rebel groups and victims of the civil war did not join these talks. 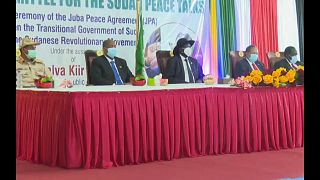 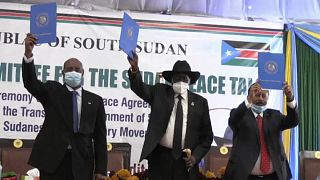 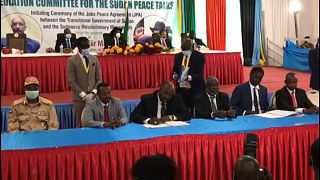