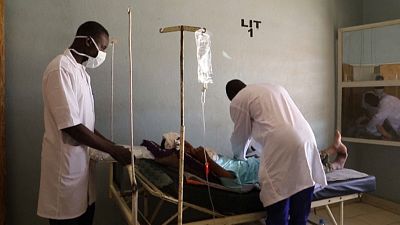 Mali's ministry of health said this week that 59 people have died of malaria in the north since the start of the year, almost double the number of deaths over the same period last year.

Already struggling to curb coronavirus, the poor Sahel country is also fighting a brutal jihadist insurgency active in the north and centre of the country.

Medical workers in the north registered 13,000 malaria cases between September 21 and 27, marking an 88 percent increase on the previous week.

"At the moment, the health system is really overwhelmed," said Cheick Ag Oufene, a health centre administrator in the northern town of Kidal, who called the situation "very alarming".

Mahamadou Sangare, a doctor in the northern town of Aguelhok, said malaria has been wreaking havoc since the arrival of the rainy season.

Treating severe cases is difficult in the remote north, he added, raising the likelihood of fatalities.

Malaria claims hundreds of thousands of lives across the African continent each year.

But the World Health Organisation warned in April that the coronavirus pandemic could disrupt campaigns against the mosquito-borne disease, leading to a spike in cases.

Rudy Lukamba, a Red Cross doctor in Mali, told AFP that Covid-19 "has absorbed a lot of attention and redirected some of the funds, which has caused delays in prevention activities".

Swathes of Mali lie outside government control after a jihadist insurgency emerged in 2012 and triggered a deadly conflict which has since spread to the centre of the country.

Failure to end the long-running conflict contributed to anger towards president Ibrahim Boubacar Keita, whom young military officers toppled in a coup on August 18.