Tanzania’s president, John Magufuli, who is seeking reelecton for a second five-year term has made several promises to the citizens.

Among the several promises are the expansion of the transport infrastructure, to help link farmers to the market and the Sh121-billion water project for Njombe Region if he wins October’s elections.

On the other hand,Tundu Lissu, the major opposition leader, pledged widespread reforms to ensure the people’s rights and freedoms are respected if elected. He promised to compensate all victims of what he described as “injustice” committed against them such as demolitions, unfair sacking of public servants and prejudicial trials.

He also accused the incumbent president of setting strategies for rigging the october’s elections.

A series of cases were filed against leaders of the main opposition parties that saw nine of them from Chadema sentenced to five months in prison or pay a total of Sh350 million in fine after they were found guilty of holding an illegal assembly and demonstrations. 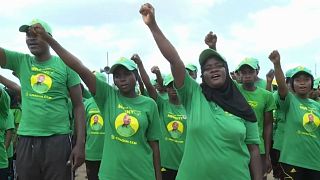