The Congolese striker came into the game having scored in Beijing’s last three matches. His latest performance, a sharp contrast from his first four games of the league, where the former French youth international couldn't find the net.

Bekambu is now in the lead of the scoring charts ahead of Shenzhen's Cameroonian/Nigerian John Uzuegbunam.

Cedric Bakambu had made headlines in 2018 when he left Spanish club Villareal for the Chinese Super League. A transfer of 74million euros at the time, that made him the most expensive African player in history. Last winter, he had been expected to join FC Barcelona.

“It’s the first time in my career that I scored four goals in one match, which makes me very happy. What’s more delightful is that we have nailed the important victory after three unsatisfying matches,” Bakambu said in a post match interview.

Indeed, the scoreline reflected Beijing’s dominance but it could have been more, with 10 shots on target.

The result keeps them second in the Chinese Super League standings, three points behind Shanghai SIPG. 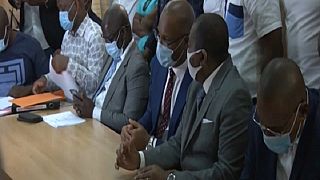