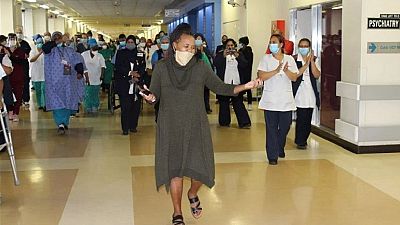 A South African woman danced out of a hospital in the Western Cape Province with medical staff at the Groote Schuur Hospital (GSH) clapping and cheering her on.

48-year-old Zuliswa Maqana was admitted to a district hospital on May 4 with severe virus symptoms. She went through 54-days in Intensive Care Unit, ICU; out of her 77-day experience which ended on Monday July 20.

The Provincial Premier Alan Winde shared Zuliswa’s story on his social media handles, paying tribute to her resilience and to the medical staff that continue to take charge of the fight against the raging pandemic.

The premier stressed that no one would have expected her to be dancing out of the hospital, but the jubilation was there for all to see. “Thank you so much to Groote Schuur. Everybody was so nice to me and the doctors were wonderful. I am so happy with the treatment I got at Groote Schuur.

“I didn’t know what day it was [when I entered the hospital] and I couldn’t move for weeks. But they [hospital staff] helped me learn to walk again after 77 days. And they were all so happy for me when I could go home,” a grateful Zuliswa said.

“It was a rocky course through the ICU with complications and other infections along the way. Eventually, she left the ICU on 28 June and arrived in ward F5. She could hardly talk or walk on arrival in the ward, but slowly grew stronger, as she was rehabilitated by physiotherapy and nursing.

The medical care received transformed her into the radiant patient who danced out of the hospital on 20 July. One of the infections she had required her to complete a 4-week intravenous antibiotic course,” said Dr Henri Pickardt, General Surgeon at GSH.