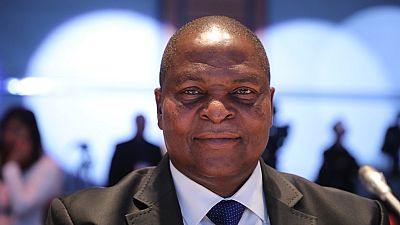 The Central African Republic, one of the world’s poorest nations, is struggling with the impact of the coronavirus on its economy.

The country now has more than 4,000 confirmed COVID-19 cases and 52 deaths, according to recent figures compiled by Johns Hopkins University.

There still seem to be plenty of fish in the Oubangui river which flows beside CAR’s capital Bangui.

Locals in the capital Bangui are complaining about a hike in food prices.

Even local fish, they say, is now expensive because armed groups “prey on the transporters.”

“How can we move forward like this? Our government isn’t even looking out for us. We are all going to die,” one fish vendor asked.

Much of the landlocked nation’s basic supplies come by road from neighboring states.

Lawlessness in the countryside has long been a problem with armed groups frequently attacking and shaking down transporters.

The PK26 customs control post at the northern exit from Bangui is the main customs revenue collection post for goods from neighboring Cameroon.

Customs officials say they have been seeing a sharp drop in arrivals of truck convoys, partly due to COVID-19 testing causing delays at the borders.

In a typical week, the officials say, they see around 150 trucks passing, but now that figure is only 40.

That means less tax revenue for the state.

In March alone, the customs officials say that revenues were down by around 3 million euros.

Customs revenue is one of the main financial windfalls of the Central African State.

The government is calling for the country’s international financial partners to help them to address the fiscal shortfall, or risk the fragile nation already with a large United Nations peacekeeping mission sink further.