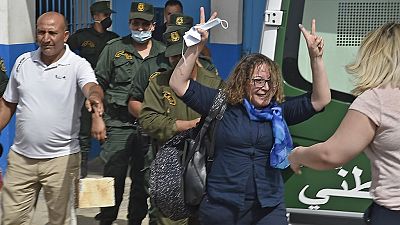 Algeria on Thursday provisionally released a key protest movement leader, Karim Tabbou, and three other jailed activists ahead of the country’s independence day.

Tabbou, 47, is one of the most prominent figure of “Hirak” a movement that forced the downfall last April of longtime president Abdelaziz Bouteflika.The activists walked out of Kolea jail, west of Algiers in the afternoon.

“Our happiness is not complete. I left brothers in prison. I left behind my brother Khaled Drareni and Rachid Nekkaz, Soheib and many others,” said Samir Belarbi, an activist.

Our happiness is not complete. I left brothers in prison. I left behind my brother Khaled Drareni.

Tabbou was accompanied by activists Amira Bouraoui and Samir Belarbi who were seen leaving the same prison after also being granted provisional releases.

Annaba, a resident who came for Karim Tabbou’s release said they came to support their brother Karim Tabbou, so they can finally feel free with him.

“The decision to release some prisoners of conscience, be it political or judicial, is not a grace made by the power, it is their right to be free. Perhaps the power wants to correct the mistakes it has made towards the freedoms of all. If the power has a real political will, it should stop these political arrests,” said Abdelghani Badi, human rights laywer.

Among the best known “Hirak” figures behind bars is journalist Khaled Drareni, head of the information website Casbah Tribune and correspondent for French television channel Tv5Monde. His request for release was rejected.

Tabbou, jailed in September 2019, was serving a one-year sentence for an “attack on the integrity of national territory”.

He also faces a charge of “damaging the morale of the army”, in a trial which has been postponed to September 14.