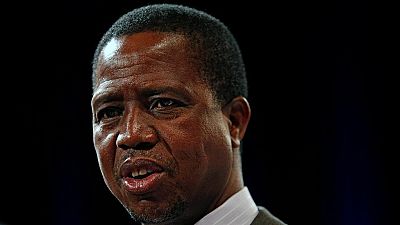 <p><strong>Zambian President Edgar Lungu on Thursday announced the reopening of his country’s air borders and airports in order to boost the economy, which had been undermined by restrictions imposed to combat the coronavirus.</strong></p> <p>“We have to get back to work (…), including in the tourism sector. I am therefore announcing the immediate reopening of all international airports,” Mr Lungu said in a radio and television address.</p> <p>His country is one of the first in Africa to reopen its air borders. </p> <p>The head of state promised to put in place strict health control measures to avoid relaunching the epidemic. To date, nearly 1,500 cases of infection, including 18 deaths, have been recorded in the country.</p> <p>Zambia was on a six-week slowdown after the first cases of Covid-19 appeared at the end of March.</p> <p>Its authorities had closed borders and schools, banned large public gatherings and shut down sectors deemed non-essential to the economy.</p> <p>Schools, restaurants and cinemas have since reopened, but the economy has suffered severely. </p> <p>Lungu put the losses on Thursday at 20.8 billion kwachas (about 1 billion euros), while the value of public spending has risen by the same amount due to the depreciation of the national currency. </p> <p>According to the Zambian National Chamber of Trades, the coronavirus pandemic has caused the country’s mining revenues, Africa’s second largest copper producer, to fall by nearly a third.</p> <p>Zambia has been suffering for years from falling copper prices – its main source of foreign exchange – which has slowed down its economy and increased its debt.</p> <p><strong><em><span class="caps">AFP</span></em></strong></p>

"We have to get back to work (...), including in the tourism sector. I am therefore announcing the immediate reopening of all international airports,"