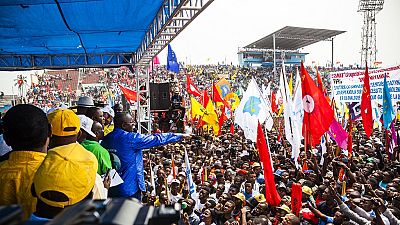 <p><strong>Democratic Republic of Congo police fired tear gas and water cannon on Wednesday to repel hundreds of protesters whose rally against a proposed new law threatened to spill into the parliament compound in the capital Kinshasa.</strong></p> <p>Opponents say the reform, which would place prosecutors under the government’s authority rather than the courts, undermines the independence of the judiciary.</p> <p>On the second day of protests, crowds of mostly young men chanted and squared up to security forces on the streets around parliament, before being pushed back by armed officers in jeeps.</p> <p>The proposal was put forward by a member of ex-president Joseph Kabila’s <span class="caps">PPRD</span> party, but has faced opposition from the <span class="caps">UDPS</span> party of President Felix Tshisekedi.</p> <p>“We will fight to the end to protect the independence of the judicial system,” said protester and <span class="caps">UDPS</span> supporter Jean Kabamba, whose head was wrapped in a Congolese flag.</p> <p>The tension and frustration felt by Tshisekedi’s party long predates the current events, said Fred Bauma from the Congo Research Group at New York University. The proposed law “is just a trigger,” he told Reuters.</p> <p>Tshisekedi took power last year, but his presidency has been hampered by an awkward power-sharing deal with Kabila, whose allies control a majority of ministries and seats in parliament.</p> <p>The recent trial of Tshisekedi’s former chief of staff on embezzlement charges pointed to other cracks in the ruling elite. Vital Kamerhe backed Tshisekedi in his successful election campaign in return for his support in the 2023 race. On Saturday, he was sentenced to 20 years hard labour. </p> <p><strong><em>Agencies</em></strong></p>

We will fight to the end to protect the independence of the judicial system.