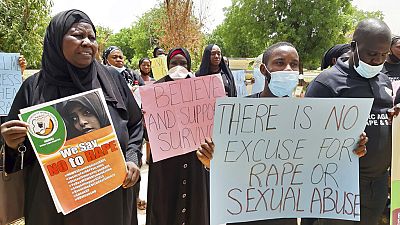 Women in Nigeria have taken to the streets and social media to protest against the rising spate of rape in Africa’s most populous nation.

Records indicate that the COVID-19 stay away restrictions have worsened the incidence of sexual and gender-based violence in the country. A trend that has been recorded in a number of African countries including Ethiopia, Kenya and South Africa.

A group of protesters took to the streets of Borno State capital, Maiduguri, to denounce the attacks which they say are on the rise. They are calling on authorities to take decisive action to deal with the threat.

The march was organized by the Borno Office of the National Human Rights Commission and the Center for Democratic Development, CDD.

Nigeria Inspector General of Police Mohammed Adamu, said earlier this week during a briefing with reporters at the presidency that the country recorded 717 rape cases between January and May 2020.

Minister of Women Affairs, Pauline Tallen, joined a similar protest at the Ministry’s premises in the capital Abuja, she brandished a car that read: “Red Card to Nigerian Rapist. Pack and Go.” Most of the protesters wore red T-shirts with the message: “A rapist is a killer.”

On social media platforms especially on Twitter, activists continued a campaign calling for decisive action on rape. Ministers, influencers and others posted photos with anti-rape messages on Twitter. Governors have also recently asked government to declare a state of emergency over rape.

Rape is becoming a national crisis. ?

It is devastating to hear about the gruesome death of our daughters who were mercilessly raped by men, who in some cases are their fathers, brothers and protectors of their chastity. pic.twitter.com/vPlsn3n9zS

We all have a role to play to stop #RAPE and #EndSexualViolence in our society. #AttitudinalChange pic.twitter.com/Wu5mzWzzBp