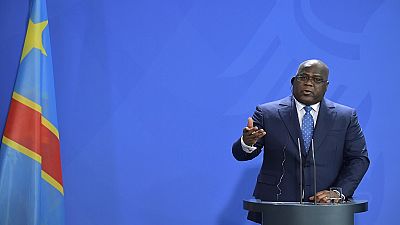 <p>Democratic Republic of Congo: President Tshisekedi reneges on justice pledge, leaving victims in despair</p> <p>President Felix Tshisekedi of the Democratic Republic of Congo has reneged on his inauguration pledges to strengthen the rule of law, fight impunity and ensure justice, leaving the families of hundreds of people killed during the country’s pre-election crisis in despair, Amnesty International said today.</p> <p>President Tshisekedi was sworn in on 24 January 2019 after winning elections, held after a two-year delay, on 30 December 2018. Nine months into his presidency he said he would not “poke into the past”. Since then he has made no effort to ensure investigations are conducted into the deaths of at least 320 people killed during the protests between 2015 and 2018.</p> <p>“President Tshisekedi and his government must acknowledge the pain that victims and their families have been enduring and publicly commit to promptly and effectively prosecute those responsible,” said Deprose Muchena, Amnesty International’s Director for East and Southern Africa.</p> <p>In a new report Dismissed! Victims of 2015-2018 brutal crackdowns denied justice in the <span class="caps">DRC</span>, Amnesty International interviewed 115 survivors and victims’ family members, on their quest for justice. Many expressed frustrations at the authorities’ inertia to investigate and prosecute those responsible. </p> <p>“When Felix Tshisekedi was still an opponent, he came and told me, ‘we will always be there for you’. But since he became president, he has given no sign … Those who killed daddy must be prosecuted and punished,” said 15-year-old Kelly Tshimanga, whose father, Rossy Mukendi Tshimanga was killed by a police bullet to the stomach at the Saint Benoît Catholic church in Kinshasa on 25 February 2018.</p> <p><strong>Elusive justice</strong></p> <p>Several families told Amnesty International the inaction over complaints lodged for investigation had discouraged them from pursuing justice, while others said they were afraid to seek justice for fear of reprisals. Some regarded justice as a luxury for the rich.</p> <p>The mother of another victim killed by Republican Guard soldiers on 19 December 2016 said: “The soldiers who shot my son are well known to everyone in the neighbourhood. They have weapons, they can do anything they want. Lodging a complaint against them would be suicide for me and my children. I have already lost a son; I do not want to cause more deaths in my family.”</p> <p>Boweya Ntando, 46, died from a gunshot to the head on 20 September 2016. Her sister, Molela Mowaki, a fish seller, now cares for Boweya’s 12 children together with her own six. She said: “I know nothing about state affairs, and I have nobody to help me. Even if I knew what to do, where would I find the money to pay a lawyer when I am already struggling to take care of these children? Is justice not a right all victims are entitled to?”</p> <p>The authorities paid funeral expenses for some victims, then harassed their families for trying to pursue justice. Thérèse Kapangala, an aspiring nun was shot dead in Saint François de Sales Catholic church in Kinshasa. Her family is determined to get justice and rejected money from the authorities. </p> <p>“The state has not yet told us who killed our daughter, why and from whom came the order to shoot at churchgoers. Yet it wants to make fun of us or is it a way to buy our silence? Our daughter’s blood is priceless. I know we are taking a lot of risks in demanding justice for Thérèse. We owe it to her. Those who shed people’s blood must know that it comes at a high price,” said Father Joseph Musubao, her uncle.</p> <p><strong>Farcical investigations</strong></p> <p>Under international pressure, former President Joseph Kabila constituted three committees to investigate the deadly crackdowns on protestors, none of which have resulted in any prosecutions.</p> <p>The first committee established in 2016 investigated violent protests that rocked the country from 19-21 September 2016, resulting in at least 49 people killed, when the electoral commission failed to announce the eagerly awaited elections. Its findings carefully curated buildings destroyed, dismissing dead protestors as looters. It said nothing about the use of lethal force by security forces.</p> <p>“The <span class="caps">DRC</span> is governed by law and is a signatory to international human rights instruments which strictly forbid extrajudicial execution and the use of excessive force by security forces. Anyone suspected of committing unlawful killings should be arrested, charged and accorded a fair trial without recourse to the death penalty. They must be held accountable for their crimes,” said Deprose Muchena.</p> <p>A second committee created in February 2018 investigated the use of deadly force against protestors on 31 December 2017 and 21 January 2018, recommending prosecution of security officers who ordered or used excessive force against protestors. In April 2018, six human rights organisations on the committee stepped down a month after the report was published because of the government’s reluctance to implement the recommendations.</p> <p>“Justice and investigations are just a farce. It is a public relations exercise to try to put people to sleep,” said Father Jean-Claude Tabu of Saint Benoît Parish.</p> <p>A third committee constituted in June 2018 to re-investigate protestor killings in September and December 2016, never finished its work. Insiders said security officers blatantly ignored summons, with work eventually stalling when the responsible minister took to the campaign trail.</p> <p>“The demands of victims and their families for accountability for human rights violations cannot be wished away as inconveniences. President Felix Tshisekedi must acknowledge their suffering and break with past impunity to ensure justice is served,” said Deprose Muchena.</p>