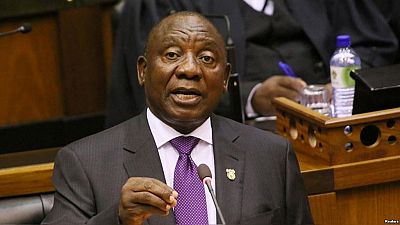 South African President Cyril Ramaphosa has condemned as “inhumane acts” the violence against women which, according to police, have skyrocketed since the relaxation of the containment in his country, the most affected by the coronavirus in Africa.

“I have been deeply disturbed by an upsurge in the murders of young women by men in recent days,” President Ramaphosa said.

One of the most terrible of these violence was that of an eight-month pregnant woman whose body was found stabbed and hung from a tree a week ago in Roodepoort, a western suburb of Johannesburg.

I have been deeply disturbed by an upsurge in the murders of young women by men in recent days.

A few days later, on Friday, the body of another young woman was found buried under a tree in Soweto.

But police have reported several other cases of such cases across the country in recent days.

“This is a dark and shameful week for us as a nation,” the head of state said. “We note with disgust that at a time when the country is facing the most serious threat from the coronavirus, violent men are taking advantage of the easing of restrictions to attack women and children,” he added.

On record, as many as 51% of women in the Sourthern African country had experienced violence at the hands of someone they wre in a reletionship with, the president statement said.

South Africa has one of the highest rates of domestic violence in the world. A woman is murdered there every three hours, according to police statistics.

This rate is on average five times higher than the world average.

“It is a dark and shameful week for us as a nation,” says South Africa’s President Cyril Ramaphosa following a surge in violence against women since the country began to lift coronavirus restrictions, including a ban on the sale of alcohol.https://t.co/JdSAIarRgh

Hampered for two months by strict containment of the entire population, the coronavirus epidemic has accelerated in South Africa since the government decided last month to loosen the grip on the country’s economy, which was in recession before the health crisis began.