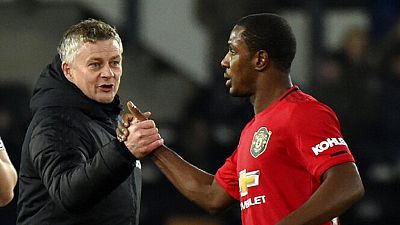 Nigerian international Odion Ighalo’s loan to Manchester United has been extended until January 2021. The club made an official announcement via a statement posted on its website.

The news ends widespread speculations that he was due to return to his parent club Shanghai Shenhua with the expiry of his contract.

His contract was initially due to end on 31 May but he will now remain with the Reds until 31 January 2021, enabling him to build an impressive start to life with the club he supported as a boy.

Ighalo had pushed to stay but the Chinese club appeared adamant till now. The club have now accepted United’s conditions to extend the loan.

Earlier today, he posted a photo with the caption: “Happy new month Fams.” He has in his time at Old Trafford, played eight games, scored four times and provided an assist.

Fans on social media are celebrating the extension for the first Nigerian to feature for the club which is widely supported across Africa’s most populous nation.