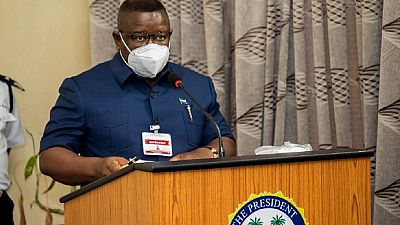 Sierra Leone today recorded 100 new infections of COCID-19. A record number over 24-hours and more than double its highest daily jump since the index case was confirmed in the country on 31 March.

67 of them are from among 85 Sierra Leoneans repatriated on Friday from Kuwait where they’d been working mostly domestic workers.

Sierra Leone now has a total to 721 confirmed cases. According to a journalist Umaru Fofafna, the daily deaths have continued with the toll currently at 40.

I have directed the military to immediately deploy to our international airport and land crossing points in order to enhance security and support compliance with all public health directives advisories.

“Concerns are now turning into worry in a country where most people don’t seem to have taken the pandemic seriously,” he wrote in a tweet.

…for resident violators from several countries including #SierraLeone. The 85…are those who qualified”. The nature of their offenses isn’t clear. They’ve been quarantined at the medical school for the mandatory 14 days under the country’s #Covid19 measures, EOC says.

May 13: No case, UAE donation arrives

Sierra Leone recorded zero new cases for the first time in almost exactly one month on May 12. The last time it did was on 13 April.

The total number of confirmed cases stands at 338. The death toll is at 20 whiles the recoveries are at 72. The country remains one of West Africa’s least impacted so far.

Meanwhile, a consignment of COVID-19 supplies were delivered to the country from the United Arab Emirates on Tuesday, May 12.

“The Government and people of Sierra Leone are most grateful for the medical supplies you sent us. Your generosity in this hour of need will further strengthen our response to COVID-19,” president Bio wrote in a tweet thanking the UAE ruler Mohammed bin Zayed.

Accra Africa, Zimbabwe, Kenya and Niger have also benefited from the UAE Aid, which is a leading soft power outlet of the Emirati government.

I want to thank my very good friend, His Highness, MohamedBinZayed
. The Government and people of #SierraLeone are most grateful for the medical supplies you sent us. Your generosity in this hour of need will further strengthen our response to #COVID19. pic.twitter.com/83TMXjqbFn

May 4: President tests negative after self-isolation

President Julius Maada Bio has tested negative after a 15-day self-isolation, he confirmed on Twitter today.

“After my fifteen-day self-isolation period, all tests for #coronavirus are negative. I am very healthy and determined as ever to fight this Corona pandemic in Sierra Leone,” he said in a tweet.

President Bio entered self-isolation after a bodyguard of his tested positive for the virus. He, however continued to work from home. He is set to resume work in his office on Wednesday.

Sierra Leone is currently under a three day nationwide lockdown that ends tomorrow. Maada Bio imposed it to contain community transmission of the virus. The case statistics as of May 4 were as follows: 166 confirmed cases, nine deaths and 29 recoveries.

After my fifteen-day self-isolation period, all tests for #coronavirus are negative. I am very healthy and determined as ever to fight this Corona pandemic in Sierra Leone. #washhands#StayHome #Maskup#Staysafe

President Maada Bio has subsequently imposed a three-day nationwide lockdown starting Sunday May 3. He cited “epidemiological data and other evidence” that indicated that “there is community transmission of the virus.”

In a nationwide address he said the government had decided “to intensify contact tracing and detection; scale up testing and isolation and expand treatment.” Banks are expected to open on Friday and Saturday ahead of the lockdown.

Sierra Leone more than doubled its coronavirus cases in the last 10 days (April 20 – 30 from 64 cases to 124). As of May 1, twelve new cases had been detected bringing the tally to 136 confirmed cases.

The number of people in quarantine has more than doubled and now stands at 2,642. Authorities said they are widening the tracking net in order to ring fence all possible suspects.

Epidemiological data and other evidence indicate that there is community transmission of #COVID-19 in #SierraLeone. I therefore declare a three-day nationwide lockdown covering the period Sunday, 3rd May to Tuesday, 5th of May, 2020.

Sierra Leone president Julius Maada Bio is to undergo 14-day self-isolation after one of his bodyguards tested positive for COVID-19, reports from the West African country indicated as of Monday evening.

The president’s spokesperson confirmed the development to journalists and said the president was going to be working from home during the period. No one in the household of the first family had, however, shown any symptoms related to the virus.

“The EOC is testing all contacts of one of my security staff who had been in a 14-day quarantine and has tested positive for #COVIDー19. My government will continue to be transparent and urges citizens to protect themselves by following all hygiene and other protocols,” the president posted on Twitter.

The figure represented an increase of more than 200% from five days ago. Six of the eight cases were from the capital Freetown and one each from Kenema and Port Loko districts.

President Maada Bio becomes the second known African leader to self-isolate, the first being Botswana president Eric Masisi who self-isolated after attending an inauguration ceremony in Namibia. At the time his country was uninfected whiles Namibia had recorded three cases.

A number of African presidents have also confirmed taking the tests with all of them having tested negative. South Africa’s Cyril Ramaphosa, Ghana’s Nana Addo Dankwa Akufo-Addo and Nigeria’s Muhammadu Buhari have all tested negative.

Twenty-four hours after confirming an index case, Sierra Leone announced a second case which involved a medical doctor with no links to the first patient. Both cases were registered in the capital Freetown.

Meanwhile, doctors in the country are pushing for a two-week lockdown instead of three days. They argue that 14 days being the virus incubation period could help identify any potential cases.

They also called for protective gear for all health facilities and a “designated and adequate facility” for affected frontline health workers”, plus compensation.

In next door Guinea, which is also under a state of emergency, a big jump in figures have been recorded. Twenty-one new cases have shot the tally to 52. The new cases emerged from a list of primary contacts of earlier patients from Europe.

Sierra Leone president Julius Maada Bio has confirmed that the country has its first case of COVID-19, multiple media outlets in the West African country have confirmed.

The country becomes the 48th African country to record a case as well as the last in West Africa to do so. Already a raft of measures have been imposed to check the entry and subsequent spread of the virus.

Earlier today, government announced the latest leg of measures which included that schools and other learning institutions throughout Sierra Leone will close today, indefinitely.

Government had closed all borders last week after neighbours Guinea and Liberia did so. Guinea also announced a 9pm – 5am curfew throughout the country to stem the spread of the coronavirus.

President Alpha Conde also isolates the capital, Conakry with no vehicular movements allowed to and from the rest of the country. This, after the country’s COVID numbers doubled. Guinea’s current tally stands at 22.

According to reports, the measure was to keep out the coronavirus which has engulfed all of West Africa except for Sierra Leone. The country tested two cases which turned out to be negative.

The border closures come in the wake of same action taken by neighbours Guinea and Liberia. Guinea president Alpha Conde declared a state of emergency on Friday also for 30-days over the virus.

The closure will last for a renewable period of 30 days excepting cargo vehicles which will be limited to two apprentices & a driver. They’ll be subjected to a 14-day surveillance by both countries on entry and exit.

All learning institutions & entertainment centers have been closed for 14 days, as have churches & mosques. All cultural events have been prohibited.

Liberia is currently in a lockdown over the pandemic. The three countries were at the heart of the Ebola epidemic that killed thousands years ago.

Despite being among 11 African countries that have not recorded any cases of the coronavirus, Sierra Leone president Julius Maada Bio has imposed a twelve-month state of public health emergency effective today March 24.

Our correspondent in Free Town, Eric Sylas Kawa, had reported last week that government had imposed a raft of measures but the president in an address said a lockdown was not on the cards.

Today’s move signifies that the country is not taken any chances with the pandemic which has affected all its neighbours in the region.

#SierraLeone
Sierra Leone’s President, Julius Maada Bio has declared a state of Public Health Emergency to tackle the Corona Virus. The 12 months state of emergency starts on the 24th of March. Sierra Leone is among few countries to be free of #COVID19africanews africanewsfr

One of the country’s experienced journalists Umaru Fofana reported the said flight had a that passengers aboard the flight had a suspected COVID-19 case leading to the decision to quarantine all the passengers. It is not known how authorities detected the case in question.

“At least three passengers refused to be isolated saying they’d rather return to where they’d come from…,” Fofana said in a tweet.

“Meanwhile passengers who’ve just arrived on an Air Peace flight from Nigeria have also been asked to be quarantined. They’ve refused, citing the (Sierra Leone) government policy which says only passengers from countries with up to 50 confirmed cases of coronavirus should be automatically quarantined,” he said in a follow up tweet.

Sierra Leone remains one of a handful African countries yet to record a coronavirus case. But like all governments are doing, the presidency released a detailed statement that outlined directives crucially banning overseas travel for all government officials and urged members of the public to heed same.

An initial statement had directed thus: “Public gatherings should not be attended by more than One Hundred (100) persons,” the second directive read. But a Ministerial team that visited the airport on Monday had urged passengers to adhere to health protocols.

A statement from the president on the pandemic read: “I have directed the military to immediately deploy to our international airport and land crossing points in order to enhance security and support compliance with all public health directives advisories.”