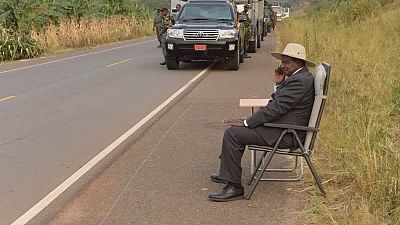 A High Court in the Ugandan capital Kampala earlier this week ruled that the president had the right to decide who follows him on social media platform Twitter.

The court presided over by Justice Andrew Bashaija held that even though personal Twitter handles could be used for official communication by a public official, it remained an individual and private property.

“Being private twitter handles, therefore, the respective persons (President Museveni, Mr Ofwono and AIGP Kasingye), have the latitude to choose whom to allow or block in those handles,” Justice Bashaija ruled.

Twitter is my private thing and secondly there is no right which does not have a limit. If you do not behave reasonably, I block you. We deserve decorum and respect.

A Ugandan national living in the diaspora, Hillary Innocent Taylor Seguya, took the president and two other public officials to court for blocking him on Twitter.

According to Seguya, he was on July 30, 2019, blocked by the president from following, viewing, contacting, replying, liking, tagging and retweeting the tweets on his handle without notice and/or affording the applicant a hearing.

He averred that he had the right to have access to their pages in order to benefit from public information. He continued that the actions infringe on his freedom from discrimination, thought, conscience and belief guaranteed under Article 29 of the Constitution.

“The President is a public officer and a holder of a Twitter social media platform handle @KagutaMuseveni and there is no other official handle for his office. He opened the Twitter handle when he was holding the office of the President and he has since been using it in his official and not in private capacity,” the petitioner’s suit read in part.

The petitioner through his representative Hassan Male Mabirizi in closing their arguments in court asked for 6 billion Ugandan shillings in general damages for “mental anguish and discrimination.” The Attorney General who represented the officials asked for the case to be thrown out.

Reacting to the case in February 2020, Ofwono Opondo, the government spokesman who also blocked Seguya said his handle was personal and he reserved the right to decide who could have access to it.

“I think Mabirizi is a time-waster because our twitter handles are not official government platforms and neither have they been gazetted,” Opondo said.

Adding, “Twitter is my private thing and secondly there is no right which does not have a limit. If you do not behave reasonably, I block you. We deserve decorum and respect,” he added. The third official is a top police officer, Asan Kasingye.

In a recent case in the United States, an Appeal Court ruled that President Donald Trump could not in his position block citizens from following his handle. Trump had blocked the responses of those he didn’t like on his tweet.

But Justice Bashaija questioned the relevance of the US ruling on the case of Seguya. He said Uganda did not follow US laws but the common law of Britain. The petitioner was ordered to pay legal costs of the responders.