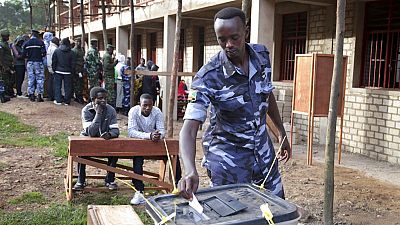 A crucial election has begun in the East African nation of Burundi, where President Pierre Nkurunziza is stepping aside after 15 years in charge but he will remain “paramount leader” in the country that continues to reject outside scrutiny.

The vote is one of the most important transfers of power in Burundi since independence in 1962.

Face masks and social distancing were observed as voting began after 6 a.m. but Burundi’s government has been criticized for not appearing to take the coronavirus pandemic seriously. Nkurunziza himself attended crowded political rallies. The country has 42 confirmed virus cases.

Regional observers are not present after being told that arriving foreigners would face a 14-day quarantine, and on Wednesday morning citizens and journalists said access to social media was not possible without a virtual private network.

Ahead of the vote, government agents were accused of harassing the main opposition party, the CNL, whose leader Agathon Rwasa is believed to be in a close race with Nkurunziza’s chosen successor in the ruling CNDD-FDD, Evariste Ndayishimiye. Police have accused Rwasa of making “incendiary and defamatory” remarks and inciting revolt.

Some in Burundi worry that a rigged election could spark the kind of street demonstrations that marked the previous vote in 2015, when Nkurunziza decided to run for a third term that some called unconstitutional.

The deadly turmoil that followed badly damaged global relations, and Burundi became the first country to leave the International Criminal Court after it started investigating allegations of abuses. The U.N. human rights office reported more than 300 extrajudicial killings and was kicked out of the country. Burundi’s government has denied allegations it targets its people.

Last week, the World Health Organization’s top official in Burundi was kicked out as well amid concerns about the pandemic response.

If none of the seven candidates receives more than 50% of the vote, a runoff election will occur within weeks. More than 5 million people are registered to vote in the country of nearly 12 million.

Analysts have said that Ndayishimiye, a retired general, would be a weak president because he will be a front for the 56-year-old Nkurunziza and other powerful ruling party members.

Many Burundians were surprised that Nkurunziza would step aside after a referendum in 2018 extended the length of a presidential term to seven years and led many to believe he would try to stay in power.

Critics and rights groups have warned that Nkurunziza is unpredictable and the election could be a mere formality.

Rwasa, the top opposition candidate and deputy parliament speaker, has told The Associated Press he feels it’s important not to boycott the election even if the outcome is not expected to be fair. Some voters reflected the skepticism and uncertainty.

“I come to vote for the change. Everybody aspires for change now,” said Jean Claude Bitsure, a teacher.

More than 300,000 people who fled Burundi amid the turmoil caused by the previous election remain refugees.