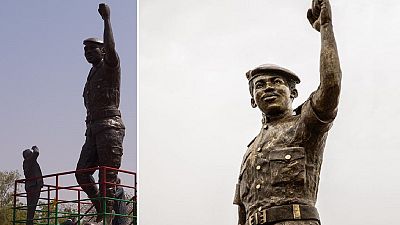 A little over a year after an initial bronze statue was unveiled of Thomas Sankara, government unveiled another – of the same work.

Criticisms had trailed the March 2019 statue which a number of people said did not do justice to the former Burkinabe leader – at least per his looks.

The criticized sculptor, Jean Luc Bambara, went back to the drawing board and came up with the new one which many say is an upgrade from the first work.

Speaking at the event, Foreign Affairs Minister Alpha Barry told French broadcaster RFI: “It’s hard to say whether one can 100% capture Thomas Sankara, but what we have [now] represents him and that’s what matters most.

“The government has given strong backing to this project to get a memorial worthy of its name,” he stressed.

Sculptor Jean Luc also had some defense for the initial work: “What didn’t work the first time around was the [short] deadline,” he said, “then there were the weather conditions.”

“Lost-wax bronze casting [uses] a material that melts in warm weather. At 45C it melted, to the point where some sections lost their shape at the casting stage.”

The initial unveiling of the monument which stands in the capital Ouagadougou was done on the sidelines of the 2019 African film festival, Fespaco. It was done by President Marc Roch-Kabore along with former Ghanaian president Jerry John Rawlings.

Sankara, hailed as the“father of the revolution” was assassinated in a 1987 coup d‘état after four years in power. He has become an icon of pan-Africanism, still celebrated by a sizeable number of young Africans.

He was deeply involved in the Pan-African Film and Television Festival and is credited with giving it a truly international dimension.

The statue was built on the initiative of the International Memorial Committee at the headquarters of the National Council of the Revolution, where President Sankara was killed, the bronze statue is five metres high.

Sankara, came to power in a coup d‘état in 1983 after serving as Prime Minister. He faced a growing challenge in the country because of his uncompromising choices, while his denunciation of imperialism earned him strong external enmity.

He was killed along with twelve comrades by a commando on 15 October 1987 during the coup that brought his then deputy Blaise Compaoré to power.

The latter, suspected of having participated in the plot by many Burkinabè, was overthrown during a popular uprising on 31 October 2014. 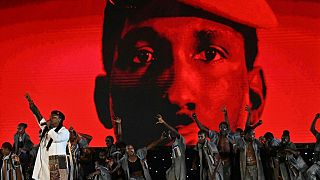