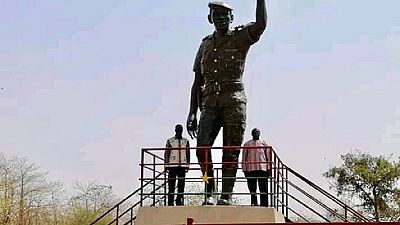 A monument in honour of the ex-president of Burkina Faso,Thomas Sankara was unveiled Saturday in Ouagadougou on the sidelines of the African film festival, the Fespaco.The“father of the revolution” who was assassinated in a coup d‘état after four years in power in 198, has become an icon of pan-Africanism, still celebrated by the continent’s youth.

He was deeply involved in the Pan-African Film and Television Festival in Ouagadougou (Fespaco), giving it a truly international dimension.

Built on the initiative of the International Memorial Committee at the headquarters of the National Council of the Revolution, where President Sankara was killed, the bronze statue is five metres high.

"We get emotional at this site but we need to capitalize on these emotions to move forward. Those who fell here remind us that we are fighting for freedom and justice"

On the monument are also represented the of three of the twelve companions killed at the same time as Captain Sankara.

Several hundreds of people, including Burkinabe President Roch Marc Christian Kaboré ,former Ghanaian Head of State John Rawlings, as well as members of the government, attended the ceremony, followed by a procession to the “Burkina” building in front of which President Sankara was killed.

Mr. Kaboré and Mr. Rawlings laid wreaths in front of this building where great portraits of Thomas Sankara and his twelve companions were hung.

“We have emotions on this site but we need to capitalize on these emotions to move forward. Those who fell here remind us that we are fighting for freedom and justice,” said Mr. Rawlings, presented as a “great friend” of Sankara.

It is a “well-deserved tribute to the man who was the father of the democratic and popular revolution,” the Burkinabe president said, adding that “we are managing to ensure that this case can finally be tried and those responsible will be held accountable.

Thomas Sankara, who came to power in a coup d‘état in 1983 after serving as Prime Minister, faced a growing challenge in the country because of his uncompromising choices, while his denunciation of imperialism and his links with the sulphurous leaders of Libya and Ghana earned him strong external enmity.

Thomas Sankara and his twelve comrades were killed by a commando on 15 October 1987 during the coup that brought his comrade-in-arms Blaise Compaoré to power.

The latter, suspected of having participated in the plot by many Burkinabè, was overthrown upon his return during a popular uprising on 31 October 2014.