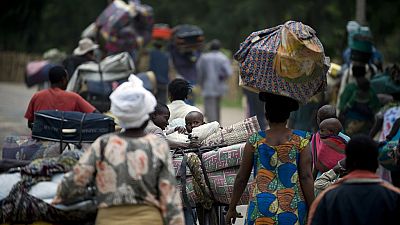 *The death toll in the ongoing armed conflicts in two unstable provinces in eastern Democratic Republic of Congo since Friday is 43 dead, AFP said Monday from administrative and military sources.

On Friday, “assailants with knives and guns killed 21 people, all civilians” in Mahagi territory, Gilbert Tsale, assistant administrator of this entity in the northeastern province of Ituri, told AFP.

In the neighbouring territory of Djugu, there has been fighting since Sunday between regular troops and militias in Lisey, army spokesman in Ituri, Lieutenant Jules Ngongo, told AFP. In these clashes, “two soldiers died, the assailants killed two civilians in their flight. The army has definitively neutralized 12 assailants,” he detailed.

On Sunday, in North Kivu province, an attack by the Allied Democratic Forces (ADF) left “six dead: five men and one woman,” according to John Kambale, the group leader in Malambo, a town about 20 kilometres from the town of Beni.

In Ituri, regular army soldiers are fighting the armed group Coopérative for the development of Congo (Codeco). Codeco claims to be defending the interests of the Lendu community (farmers) against another community, the Hema (herders and traders).

Since the end of 2017, more than 700 civilians have been killed in Ituri in violence worthy of a “crime against humanity”, a UN investigation said in January.

The Congolese army announced at the end of March that it had killed the head of Codeco, Ngudjolo.

In the town of Beni in North Kivu, the Allied Democratic Forces (ADF) have stepped up their killings of civilians since November in retaliation for military operations.

The ADF were originally Ugandan Muslim rebels opposed to President Yoweri Museveni’s rule in Uganda. They have been present in the Beni region of eastern Congo since 1995.