How are MENA athletes reacting to the postponement of the Tokyo Olympics?

For the first time in its 124-year history, the Olympic Games have been delayed due to the coronavirus pandemic.

The International Olympic Committee President, Thomas Bach and Japanese Prime Minister, Shinzo Abe concluded that the Games must be rescheduled, “to a date beyond 2020, but not later than summer 2021, to safeguard the health of the athletes, everybody involved in the Olympic Games and the international community.”

For different athletes in the Middle East and North Africa region, the IOC’s decision has meant different things.

For some qualifiers, it signals a missed opportunity to go for gold before retirement.
Whereas for some non-participants, this lockdown period is proving beneficial, allowing them more time to develop their sporting prowess.

To find out more, Inspire Middle East spoke to professional sportsmen and women displaying a fighting spirit, as the world fights COVID-19. 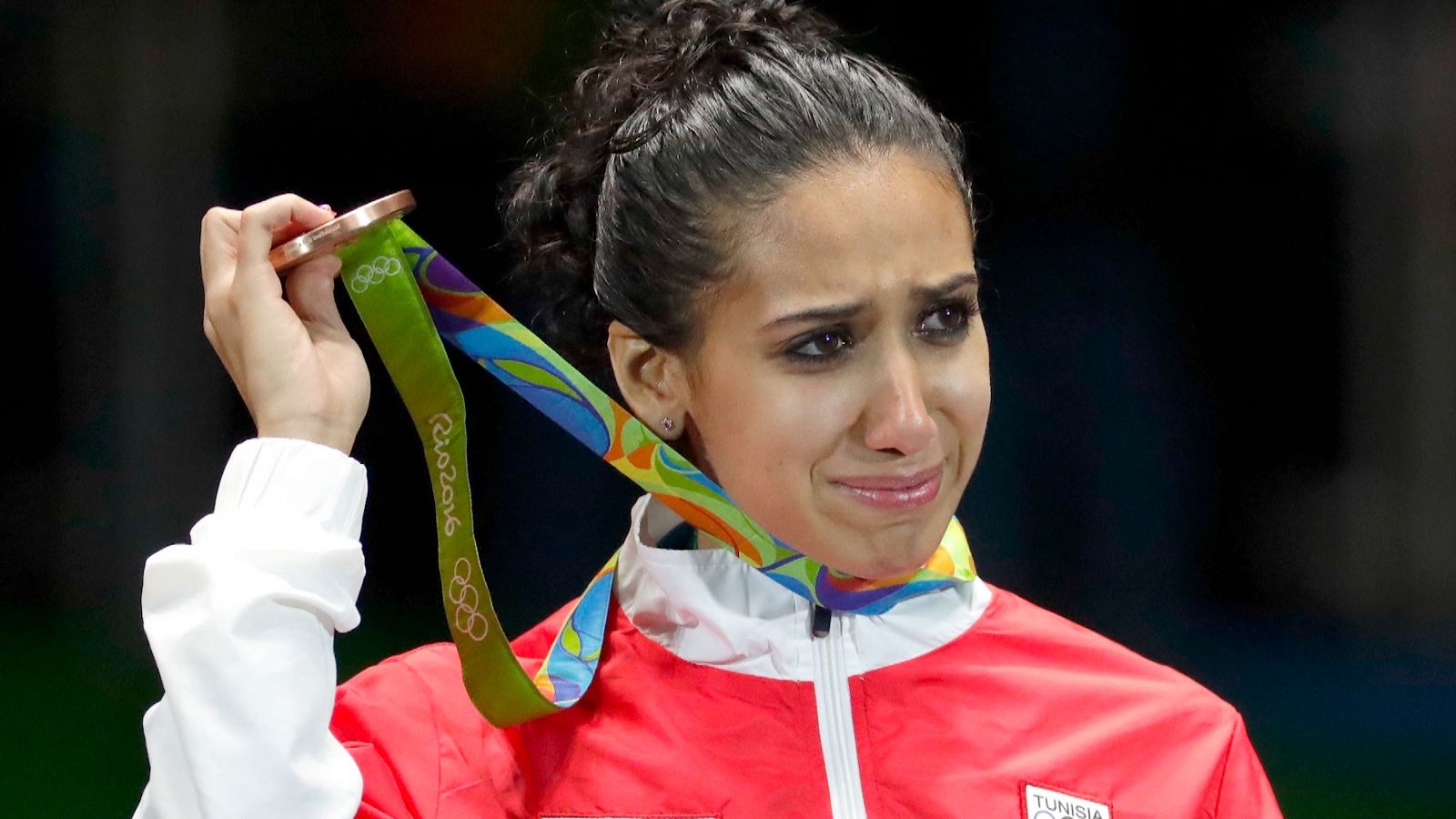 Far from her Tunisian home, two-time Olympian foil fencer Ines Boubakri is currently self-isolating in France, where she’s reflecting on the IOC’s postponement.

“It’s for the safety of everyone,” she told Inspire. “For the athletes, for the supporters, for the good of all bodies – I think also for the volunteers. So, I think it’s the best decision.”

In 2016, Boubakri became the first Tunisian fencer to win an Olympic medal and she had her sights set on a second triumph this year in Tokyo.

Despite being without much of the equipment she needs to train properly, the sportswoman describes her altered routine as “fun”. She’s mindful, however, of cautionary words from her personal trainer.

“At the beginning I said, ‘OK, I have nothing to do,’ but it’s easy to say this,” recalls Boubakri. “So, my coach told me, ‘Be careful. You’re not on holiday. All the time, you have to train.’ Also [be careful with] what I eat, because now we have [more] time.”

Whilst heeding advice from her team about remaining mentally on top of her game, the Olympian has some wise words of her own for aspiring athletes.

“Never give up, never stop fencing or doing sports,”she says, adding that in the meantime, people should, “Stay safe, spend time with loved ones and enjoy life!” 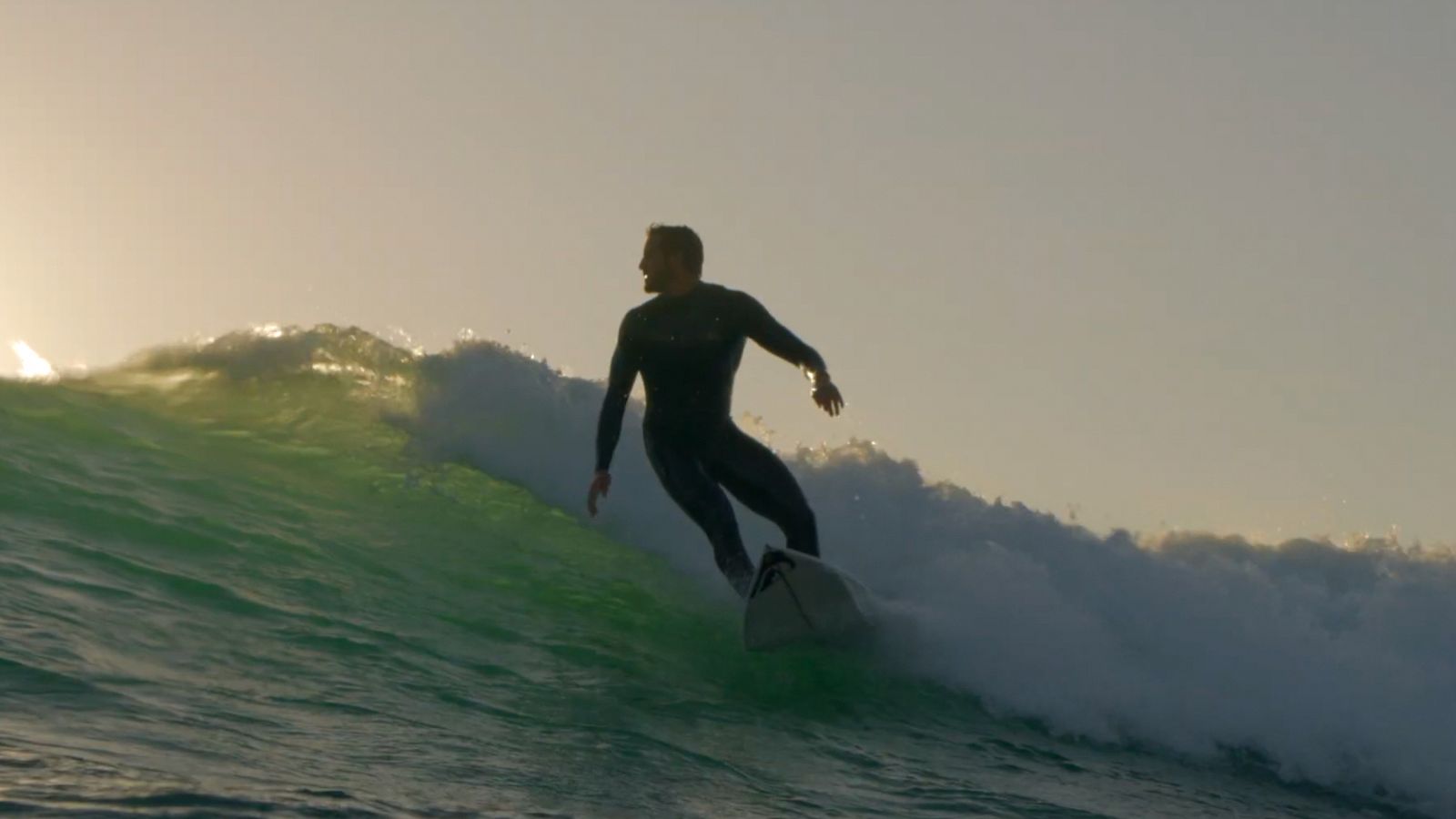 Twenty-six-year-old Ramzi Boukhiam has been surfing since he was 9-years-old.

With countless heat wins at World Surf League events, the next prize in his sights was to be gold at the Tokyo Olympics.

The IOC’s decision, however, is one that he agrees with.
“I think it’s a good call to postpone it to next year,” says Boukhiam. “[It’s] just a little bit sad because it was the first year that surfing was involved in the Olympics.”

In the interim, and in lockdown, Boukiam is sleeping more than usual, enjoying a well-balanced diet, plus doing weight training and boxing in his garden.
It’s a far cry, however, from the surf and spray of the sea.

“The most important part in surfing, and to get better at surfing, is to surf,” he remarks. “So, you can train as much as you want out of the water. But if you’re not in the water, you won’t improve.”

Mental training is all important right now, says the athlete, who is determined to set a positive example for a younger generation whom he hopes will one day follow him into the sport.

For now, his advice to them is as follows: “Stay positive, stay strong and stay at home.” 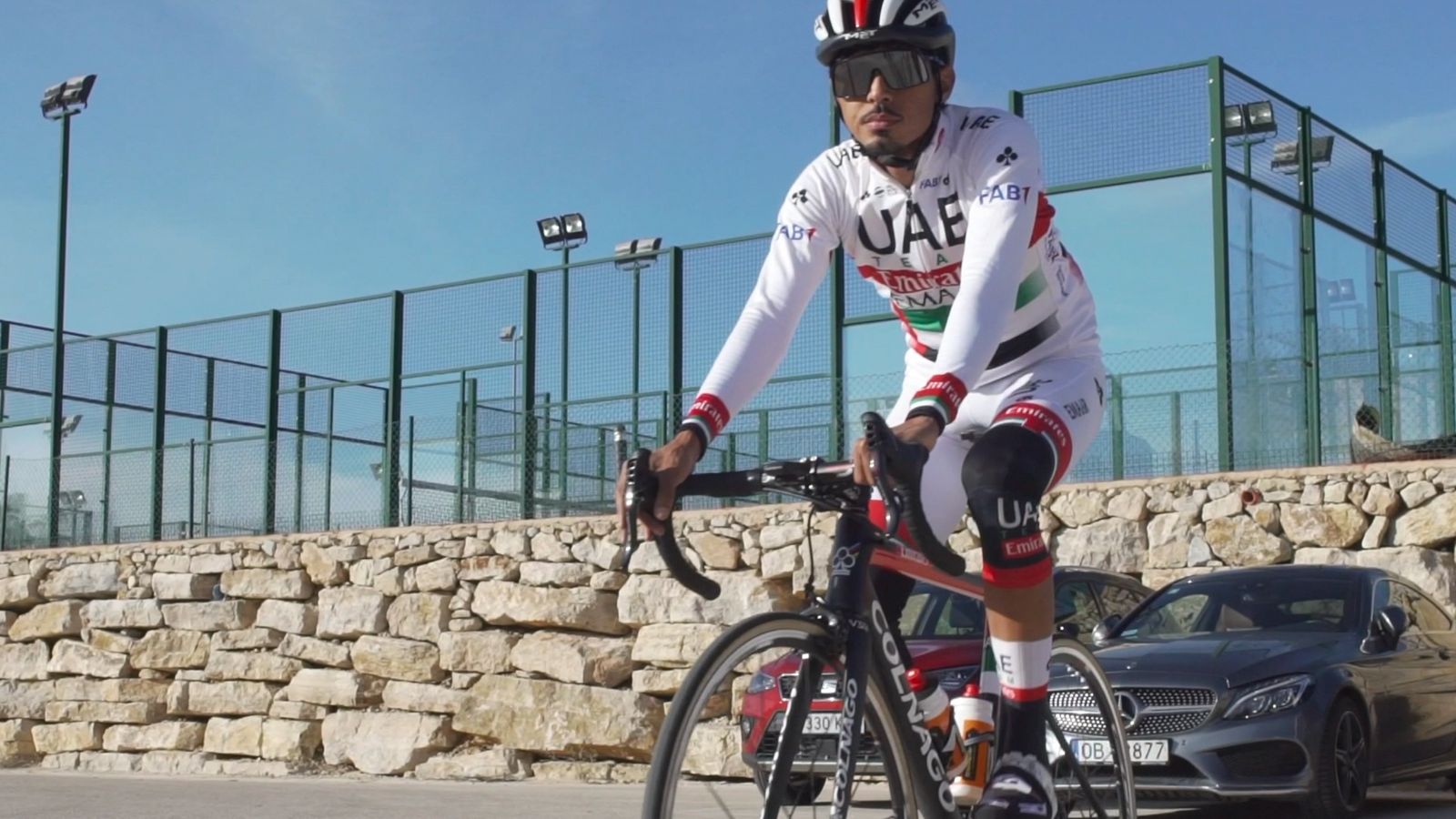 Yousif Mirza is a top-ranked Emirati cyclist who has won multiple domestic titles and participated in the 2016 Olympic Road Race.

The athlete is looking ahead to the 2021 UAE Tour, following this year’s event being cancelled after five of the seven stages.

“I think that we, as cyclists, are lucky,” he told Inspire. “We can still train and practice at home. We can also do online training.”

Home workouts have two advantages, according to Mirza. Firstly, they avoid exposure to the UAE’s hot spring weather, secondly, they allow for personal time with those often missed, due to his constant travel.

“We sit most of the time with the family, with the children,” he says. “Honestly, for us as athletes, that is a positive thing. [It’s] something that’s difficult to do during the season – to be with family.” 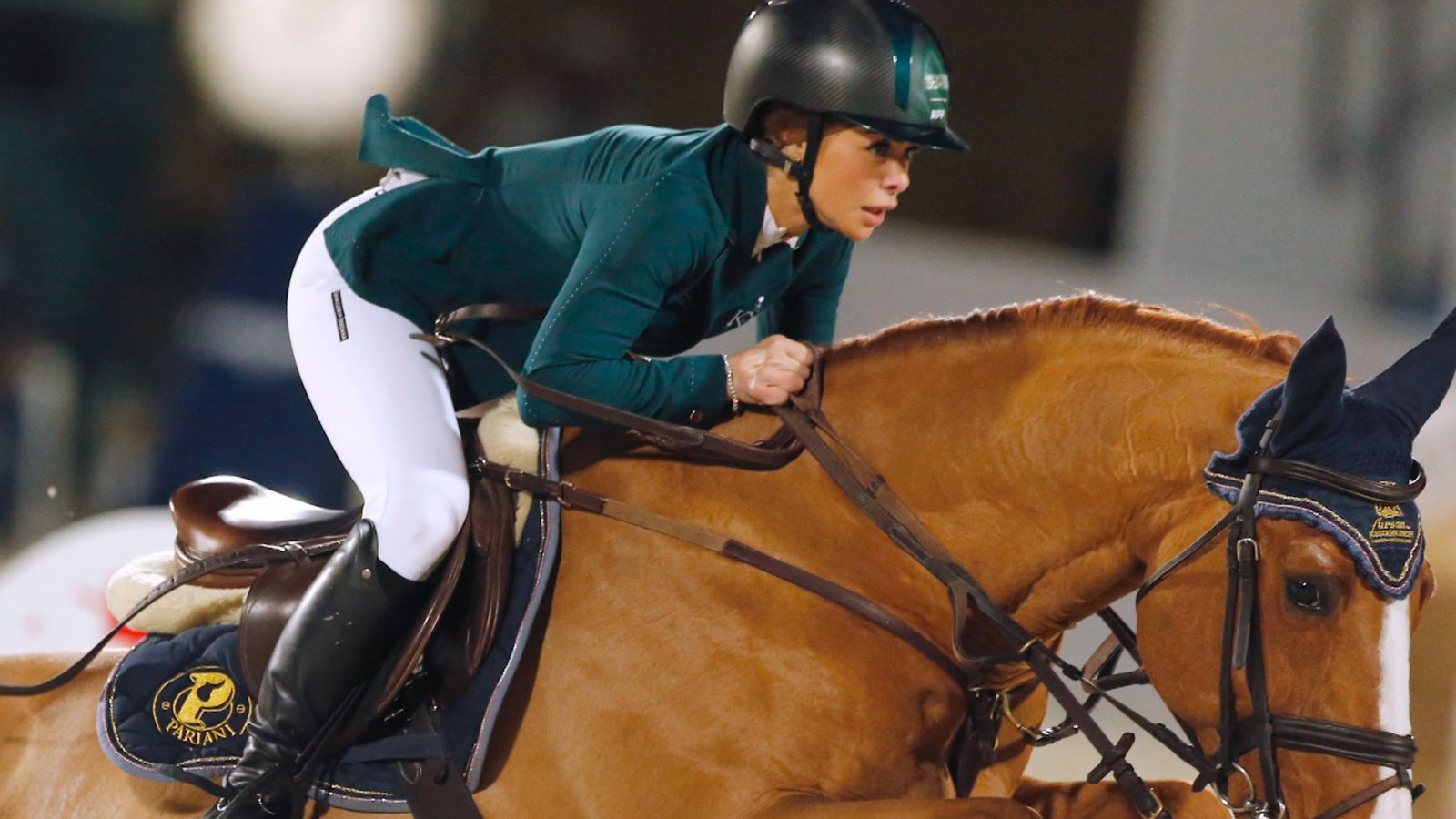 Saudi Arabian showjumper Dalmas Malhas developed a special bond with horses as a child.
Being forced to isolate from some of her champion thoroughbreds who are in Europe at this time, is particularly hard for the equestrian.

“I am missing my horses greatly, immensely really,” she told Euronews. “I’m in touch with my trainer on a daily basis and I have their videos and pictures.”

Malhas is noted for having won bronze in the 2010 Youth Olympic Games. At this unique time, she’s focusing her attention on winning national medals in the years to come.

“Last December, I had my first participation on home soil, and I can’t even begin to explain how that feels,” she says. “So, I’m really looking forward to the World Cup in 2024 and the Saudi Games.”

Really enjoyed the live workout yesterday! Thank you to all who joined ??? . A 20-30 mins workout everyday will leave you in a better mood for sure! . . When should I do the next one? . . #justkeepmoving #liveworkout #stayHome #lockdown #Persevere #crossfit #motivation #inspire #workhard #dreambig #healthylifestyle #fitnessfreak #earnednotgiven #beastmode #findyourstrong #getfit #iworkout #motivation #positivemood #strongnotskinny #workoutmotivation #dreambig #fitnesswomen #iwill #activeliving #dubaifitness

And Rached from Lebanon said he’s trying to be creative with his weight workouts during the coronavirus quarantine.

It’s time to get creative again. Took advantage of the #watergallon in the house. Here’s what i did, you might want to try it so check my stories, and my “Quarantine “ ‘s highlights .